Having walked around East Head, we said goodbye to the coast and started our inland trek around Chichester Harbour.  We had coped with inland detours before, most particularly around the Thames, Medway and Swale estuaries, which required a mammoth route of around 250 miles.  Chichester Harbour would not be quite as long as that, but it would be a good four or five walks before we reached the coast again.  As we walked north we saw the ML1387 “Medusa” cruising down Chichester Channel.  I looked her up when we got back home. 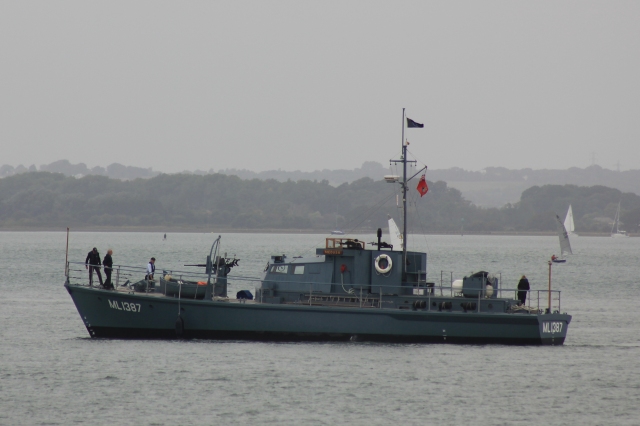 The Medusa was launched in October 1943 and commissioned that December.  In early May of 1944, she took part in Operation Fabius 1, part of the formal exercises for Operation Overlord, better known as the D-Day Landings.  One week earlier, on the night of 27 April 1944, a similar training exercise, Operation Tiger, had taken place at Slapton Sands just off the Devon coast.  On the same night, nine German E-Boats set out on a regular reconnaissance mission in the area.  Here, they saw a convoy of LSTs (Landing Ship Tanks, capable of carrying several hundred men together with lorries and tanks) that was taking part in Operation Tiger.  They could not see any naval escort, so attacked.  Three LSTs were torpedoed, one sinking in just six minutes.  Only one of the three made it back to shore.

Many men were trapped below decks and went down with the ships.  Others abandoned ship, but many were drowned.  Some were dragged down by waterlogged clothing.  Others mistakenly put their lifebelts around their waists instead of under their armpits; when they jumped into the water they were tipped on their backs, forcing their heads under the water.  Others succumbed to hypothermia as they waited to be rescued.  That night, 749 American servicemen lost their lives.

Among the dead were several “BIGOT” level clearance officers.  These had security clearance beyond Top Secret, and carried information with them about the planned D-Day landings.  Had these plans fallen into German hands, the entire D-Day operation would have been compromised.  The Allies even considered changing their plans, but incredibly the bodies of all BIGOT-level officers who had perished were recovered.  The secrecy of the operation remained in tact.  The D-Day landings went ahead a month later.  The Slapton Sands disaster was hushed up, and it was another 40 years before the public were made aware of what had happened.

The relevance of all of this to the boat we saw, the ML1387 “Medusa”, is that five days after the Slapton Sands tragedy the next training exercise, codenamed Operation Fabius, went ahead in the same place.  The Medusa was put on duty there to patrol the waters and protect the LSTs from a similar attack.  The exercise went ahead without incident, but I wonder how the crew of this small vessel felt as they set off at the dead of night, into the cold black seas, to protect their LST’s?

Walk #59 Statistics (of which this post forms the third part):