On leaving Shoebury East Beach the path follows, for the main part, the sea wall. A tarmac pathway runs briefly between the wall and some new housing, timber clad with large windows fronting the sea. The beach itself at this point is owned by MOD and inaccessible. The new housing is part of the Shoebury Garrison Development.

Shoebury is old. It is said that there was once an ancient village which sunk into the sands and now lies buried, like a cold, muddy Atlantis. Shoebury has also been long associated with the military. Strategically situated at the mouth of the Thames, a rampart was built here as early as the Iron Age (100-300BC) to protect the village that lay behind. When the Romans occupied Britain Shoebury was the site of another village, Essobira. It was attacked by the British in 50AD but is thought to have survived into the 4th Century. Two hundred years after that the Saxons made a settlement here, Scoebyrig. It is thought that this settlement later became a base for Danish Vikings when they tried to overrun the Saxons. In 894, after the Battle of Benfleet, the Vikings retreated to this point.

In 1805, Lieutenant General Henry Shrapnel, whose surname is the origin of the word of the same name, conducted some experiments in Shoebury which ultimately led to the development of the shrapnel shell. In 1848 the War Department bought its first land here, and an experimental range was opened in 1851.

The garrison buildings seen today were built between 1854 and 1871, to support the then newly founded Shoebury Ranges, and a School of Gunnery opened in 1859. Many of the buildings are now listed. The original range was built to test Armstrong Guns against Ironclad warships, but the operations quickly expanded and the military started buying up more land. In the 1890’s, when the railway was run to Shoebury, it was extended into the ranges, leading to Haven Point where our walk began. The War Department continues to buy more land, eventually acquiring the islands of Havengore, New England and Foulness. 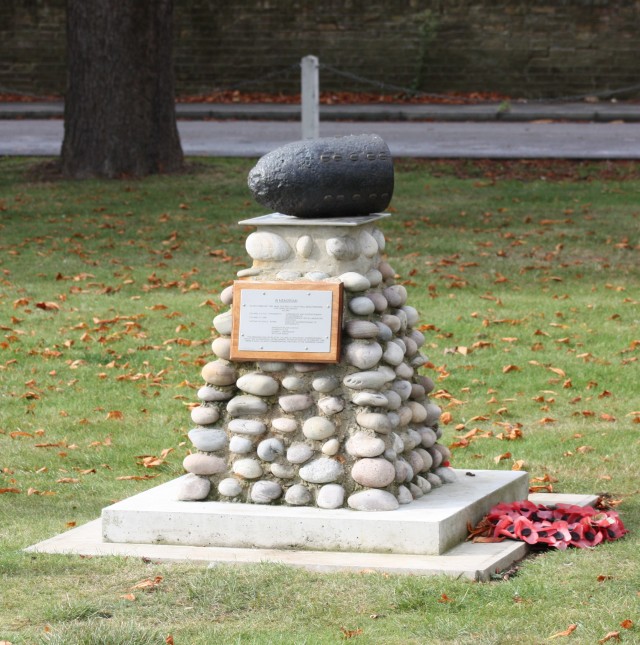 In 1885 a 6 inch artillery shell exploded during an experiment on a newly developed sensitive fuse, killing seven personnel. One of them, Gunner Allen, was standing over the shell when it exploded, and the local Times newspaper reported that he was “literally blown to pieces”. The event was considered a disaster which caught the public’s imagination, and enough monies were raised to pay for a new hospital. Today there is a memorial for those killed on the site, unveiled in 1985, 100 years after the incident.

A larger explosion occurred in 1918, when a following fire caused £3 million damage and resulted in a complete evacuation of the civilian population of Shoebury, though no lives were lost on this occasion.

The garrison itself is now gone, having been run down in the 1970’s to a caretaker crew who themselves eventually left. The Victorian garrison buildings, by this time falling into dereliction, are now in the process of being renovated and converted to housing. We passed the Officers’ Mess, where the show home behind the Victorian facade showed a modern open plan des-res abode with sea views.

The tarmac path leads on from the Officers’ Mess development to a small piece of green with the centenery memorial to those killed in the 1885 accident. 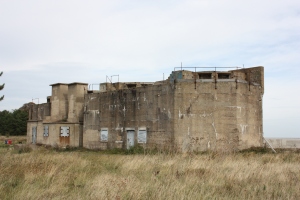 Today Barge Pier is closed, deemed structurally unsafe according to notices put up along the wall blocking access to it. Everyone seems to ignore these, however, simply jumping over the wall to wander up and down. On the internet a Google search for Barge Pier reveals it to be heavily used by fishermen, and YouTube is full of videos of kids jumping off it.

It is also at this point that a strange structure can bee seen out in the Thames, looking like a ship that has broken in two. This is in fact the remains of a Mulberry Harbour, a temporary floating harbour developed by the Allies in World War Two and designed to offload cargo during the D-Day landings. This particular one was apparently being towed round to the south coast from the north of the country, when it sprung a leak. It was decided to ditch the stricken harbour in the estuary, where it joined the other anti-shipping defence line of the time. More recently it has come to be considered a menace to the modern shipping lane. At one point the MOD decided to “remove” the obstacle by quite literally blowing it up, but local objection, backed by the Council, to destroying a piece of history was vociferous. The MOD backed down. 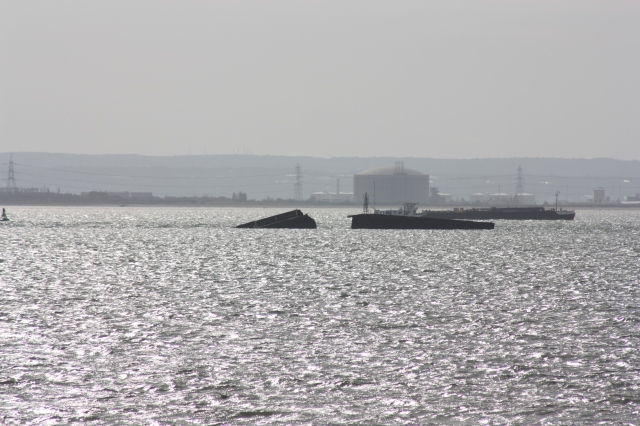 A short distance on, past an HM Coastguard lookout post, Ness Road is reached. Here was a convenient place to end the opening day of our walk around the coast of Britain. There was a Harvester where we stopped for a drink before jumping in a taxi back to the MOD guard hut at Wakering Stairs. We then, as promised, drove in to Southend and took the kids to the theme park at the pier.

The next stretch of our walk will start at the Harvester and continue westward, and so it looks like the kids will get to go to the theme park again. Whether we will be able to drag them away to continue walking, or whether our next walk is destined to be a short one, we shall see!