Having explored The Broomway to our content, we turned our attention to actually getting our round-Britain walk underway. We decided that this should start at Haven Point, just to the north, simply because Haven Point is a “corner” on the map and therefore an easy-to-remember starting point. It stands at the entrance to Havengore Creek.

The walk to Haven Point is along the sea wall. We passed three fisherman on the way, one of whom I am convinced was not a fisherman at all. You must remember this is MOD land with restricted access, full of “You Can’t Do This” notices every few yards, and with a gatehouse and guards to get through in order to access the coastline. One of the “fishermen” looked more like a plain clothes MP to me. He stood in a kind of sentry-like posture, smoking a cigarette and eyeing us up suspiciously as we approached. I could detect no whiff of fish about him. Nope, there was no way this was a fisherman. He was busted, or I was paranoid. One or the other.

Haven Point has little to recommend itself, save for the sea views. Dotted around are hulks of mysterious buildings, put to unknown uses. Some of them look like huge blocks of concrete, as big as a house, with no discernible entrance, and with their corroding reinforcing metals poking out in grids around their spalled surfaces. Every few yards a notice posts a reminder that this area is a firing range; that you should not stray from the path for fear of getting blown up; that photographs are prohibited (which is why this section of my blog is devoid of them); and that the innocent traveller is under constant CCTV surveillance.

On arrival at Haven Point, the formal starting point of our round-Britain tour, we noted the occasion, the rusted bits of metal all over the shoreline, the moderately large gun a couple of hundred yards behind us, and then turned back. We passed the MP disguised as a fisherman on our way. He was still smoking a cigarette, still seemed more interested in us than in his float, still hadn’t caught any fish, and was still busted as far as I was concerned.

Once back at the Wakering Stairs the right of way continues southwest along the seawall. This section of the coast is a wildlife haven, particularly for birds. It is said that this is because the area is devoid of humans for most of the time. Why wildlife should flock here I am not sure, because it has to be remembered that it is in the middle of an artillery range. Perhaps the wildlife prefers the thought of being shelled than to being close to humans. Perhaps it has a point!

Half a mile beyond the Wakering Stairs is Morrin’s Point, where a barbed wire fence makes it clear that the only way onward is to cut inland, as access to the coastline beyond this point is prohibited.

The path here is lined lined with blackberry bushes, eventually reaching the railway track running between Shoebury and Haven Point. When the railway reached Shoebury in the 1890’s, it was extended into the ranges, but this section has since become overgrown and looks unused. 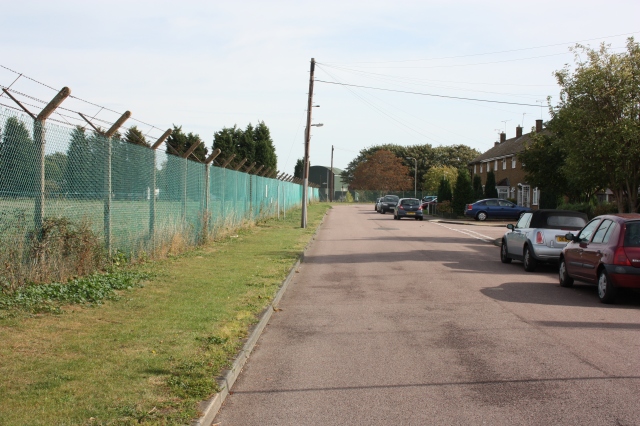 The path then leads through a field, and into the village of Cupid’s Corner. The next mile and a half of the walk follows the barbed fenceline of the MOD land, before further access to the coast is permitted. It is not an interesting route, so it was a noteworthy occasion when we passed a house called “Pussys Palace” (sic). This turned out to be a cattery. “Pussys Palace” lying just south of Cupid’s Corner – all very Carry On I thought.

Eventually the fenceline turns and leads back to the coast, joining it at Shoebury East Beach. This is a lovely spot to reach after the road walk, popular with kitesurfers. At its eastern point is a boom, leading some 1¼ miles out to sea. It was erected in World War II to protect the Thames; another boom was run from Kent, and anti-submarine netting strung between the two. There are various other reminders of World War II in the area.

For a while we sat on the grass behind the seawall, watching the kitesurfers. We then headed off, continuing our journey to Shoebury Garrison.