Posted on December 9, 2013 by Wingclipped

Having completed our short inland detour, we arrived back at the shoreline at Cobnor Rithe.  Here, a line of half-submerged posts stretched away into the sands.

These posts stretch southwest for over a mile, and there are in excess of 3,000 of them.  They were put there in about 1870, when a group of farmers saw what the Dutch were doing with land reclamation and decided to follow suit.  Their ambition and dedication must be applauded.  They sunk these stakes into the sand in order to provide the framework of a dam, filled with thousands of tons of Petersfield chalk rock.  The ambition was to silt up Thorney Channel, which runs up the western side of Chidham, separating it from Thorney Island.  Some 150 men spent six months creating the dam which, once completed, lasted only seven weeks before a gale forced a breach just to the east of Pilsey, at its far southwestern end.  The breach remains to this day, and so therefore does Thorney Channel.  However, the stakes also remain – these are the South Stakes.  I have read that you can also find pieces of the chalk rock around here.

We continued west along Cobnor Rithe, soon turning north and back inland.  We enjoyed peaceful views over the fields and farmland.

Thorney Channel turned into Southbourne Channel; we reached its end and turned west again, stopping briefly for a quick photo opportunity, courtesy of 11-year old Ben, quite the photographer. 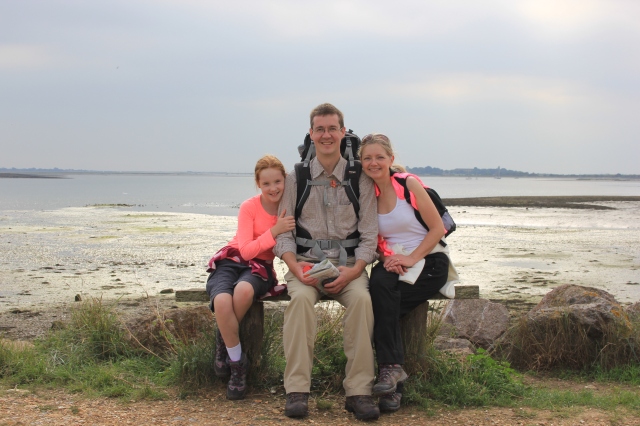 When we set off and made our way towards Prinsted, we saw what appeared to be a track in the sand, stretching out across Prinsted Channel.  There was someone walking across it.  I checked my map and there was an indistinct line of loose shingle shown.  In the distance, some rotten posts poked their heads out of the sands.  Ah!  These were the North Stakes, counterparts to the South Stakes.  They run all the way across to Prinsted Point on the other side of the channel.

I thought briefly about walking across, but in fact that path would take us directly into our next walk.  Today, we were finishing at Prinsted, and in so finishing we could hold our heads high and proclaim that we had finished our first 500 miles around the Coast of Britain!

Walk #60 Statistics (of which this post forms the final part):