Once we passed the closed footbridge across the River Adur, we realised why it was closed: they were building a new one.  Here they are – the new standing next to the old: 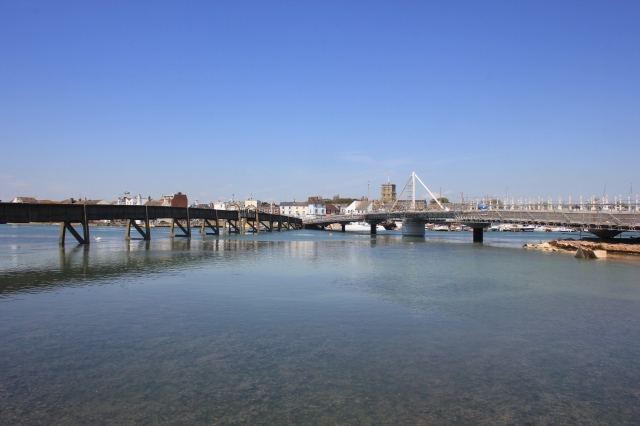 The new bridge is being called The Adur Ferry Bridge, after the Council opened up the naming to a public vote.  As far as I can tell the public did not come out to vote in their droves.  A total of 338 votes were cast, 131 of them in favour of the winning name.  It’s a pity really, because the bridge is actually an important crossing point.  We realised this when we were forced to walk round to the next crossing point on account of it being closed!  It links Shoreham town centre to Shoreham Beach, the name given to the area to the south side of the river.

Shoreham Beach is almost peninsula-like, and dominated by housing.  To its north east side is a modern development of apartments, standing right next to the south bank of the river.  It is a quiet quayside development with narrow walkways sitting a few feet above the waterline.  At one point we had to walk around Marys Place, a tiny marina with enough space for about 6 small yachts to be moored on each side.  Access was via a narrow inlet between apartment blocks.

As we emerged back to the riverbank, we saw a man stood on a surfboard, paddling slowly up the river.  “I wonder what that’s called,” mused my wife.  “I quite fancy a go”.

I called out to the man.  “It’s called paddleboarding,” he called back.  My wife watched him appreciatively as he paddled away, trying to keep his balance.

A short while later a woman paddleboarder passed us.  At the same time a motorboat ferried by.  The wash caused by the boat arced out; the woman tried to paddle towards the quayside and the safety of the railings.  She nearly made it, but realised she was going to have to take more urgent action, dropping down and sitting on the board to avoid being tipped off.  As soon as the waves subsided she shakily got to her feet again and paddled off.

None of this put my wife off – she is determined to have a go.  Pictures will follow soon (I’ll be the one piloting the motorboat and giggling in the background).

Walk #53 Statistics (of which this post forms the fifth part):