Portland Stone is probably one of the best known building materials in the world.  It is used extensively in London and the United Kingdom and has been exported to all over the world.  It has been used in many famous buildings.  St Paul’s Cathedral, Buckingham Palace, the Tower of London, the Bank of England, the United Nations Headquarters in New York – the list is endless!  I have a theory that the Isle of Portland used to be a lot bigger than it is today!

There is evidence of quarrying all over Portland.  If you spend any time there at all you can’t help but come across some quarried moonscape sooner or later.

At one corner of one of the quarries we found this: 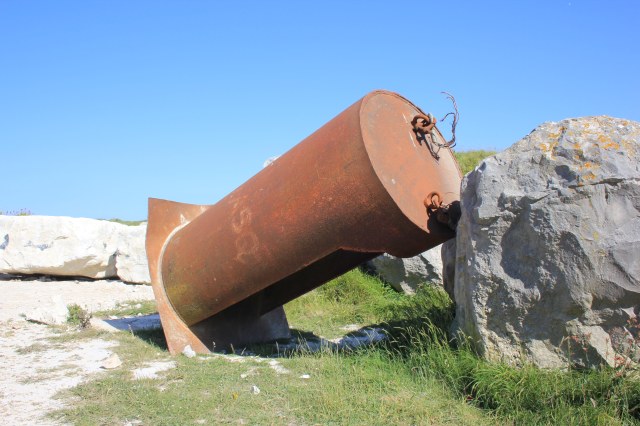 It looked a bit like the escape pod that was used to rescue the Chilean miners in 2010, although it was too big for that, and the square metal plate at the bottom clearly showed this capsule was not meant for sliding through bored rock to rescue trapped quarry workers hundreds of feet under the surface.  Perhaps, then, it was nothing more glamorous than a rusted metal Portaloo.  Probably something in between these two extremes of high adventure and the begrimed mundane.  I’ve heard it has disappeared from this spot now, so we’ll probably never find out what it was.

As we reached the not-too-high walls of Portland Prison we saw a ladder poking up from inside.  There must, I am sure, be lots of plausible reasons why a ladder would be poking over the walls of a prison, but on this particular occasion I could think of only one!  We waited for the desperate face of an escapee to peer over the top of the ladder and sniff at the fresh air of freedom, but nothing happened.  Perhaps we were too late and he’d already made a dash for it. 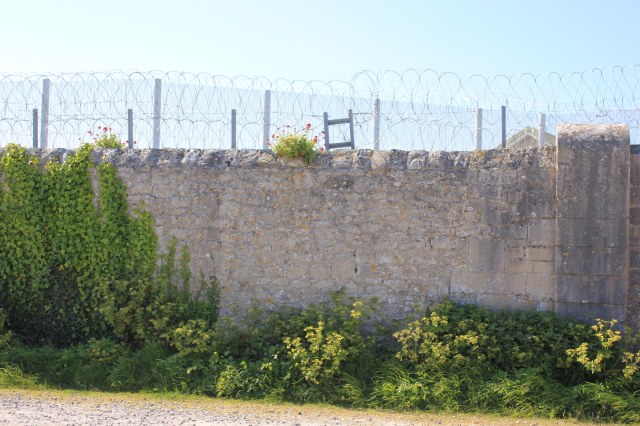 Portland Prison, by the way, once housed John Babbacombe Lee, known as the “man they couldn’t hang”.  It was not through want of trying.  He was convicted of murder, although the evidence was circumstantial, and sentenced to hang.  On 23 February 1885 three attempts were made to execute him, but all ended in failure.  Although the gallows trapdoor had been tested prior to the execution, it refused to open at each attempt.  Eventually, after the third attempt to kill the condemned man, the Home Secretary decided to give up and commute the sentence to life imprisonment instead!  Lee was eventually released in 1907 and died in the 1940’s.

Walk #82 Statistics (of which this post forms the second part):