New Ground is a road that runs along the high ground of Portland.  For coastal walkers there are convenient (and free) places to park along its length.  To the north are expansive views over Chesil Beach.

Chesil Beach is a natural tombolo, the exact origin of which is disputed to this day.  It is 18 miles long, running from Portland in the south to West Bay in the north.  It is a pebble beach; its pebbles are fist-sized at Portland and gradually get smaller and smaller, ending up pea-sized at West Bay.  It is said that if a local fisherman landed on Chesil Beach in thick fog then he could tell you exactly where he was just by looking at the size of the pebbles!

In the foreground are the embankments of Verne Prison, introduced in my last post.

As we left New Ground we passed right by its entrance. 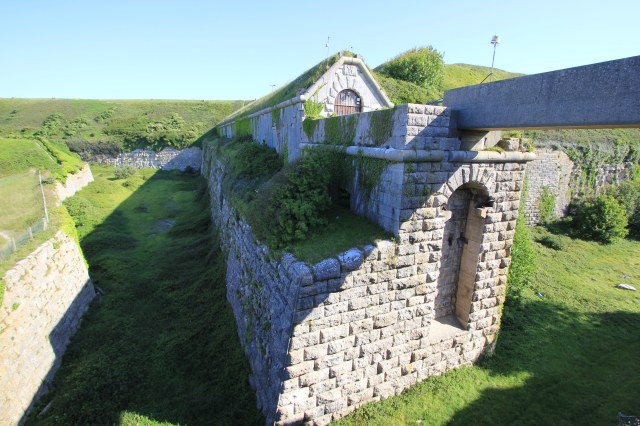 You’d be forgiven for thinking it was a fort rather than a modern-day prison.  In fact, it started life as the Verne Citadel.  It was built by convicts from Portland Prison (a different prison, which lies just to the south) between 1860 and 1872.  It was originally a fortress sprawling over some 50 acres and housing 1,000 troops, strategically located so as to have artillery overlooking the sea on three of its sides.

By 1906 the guns had been removed, and the Verne Citadel was used as a barracks and then as an infantry training centre before closing in 1948.  In 1949 it was handed over to the prison commission and turned into a medium security prison housing 575 men.  In 2013 it became an immigration removal centre.

During our walk around Portland we saw plenty of things we weren’t expecting, but of all of them we really didn’t expect to see any wallabies! 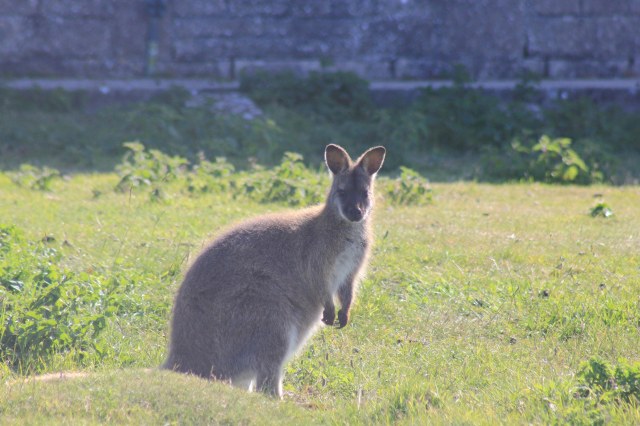 No, they were not residents of the immigration removal centre.  They were running around quite happily at Fancy’s Farm which also boasts various other domestic and farm animals.

We would see a lot more on Portland.

Walk #82 Statistics (of which this post forms the first part):

4 Responses to 82a – Portland Part II