I am sorry to start on a negative note, but there is one thing about Weymouth I just cannot get on with.  It has a statue that I really do not like.  Painted in vivid red, white, blue and gold, here it is in all its gaudy glory. 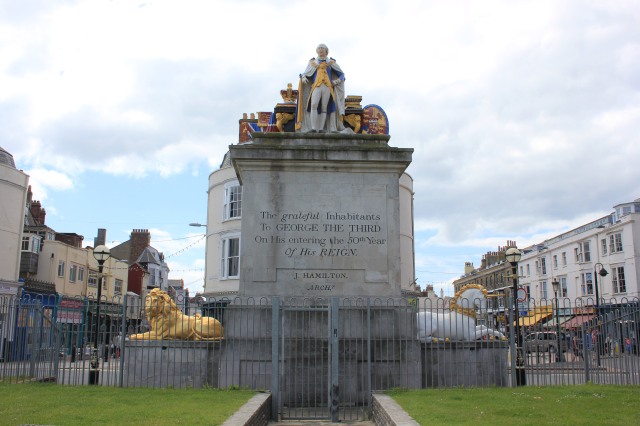 It doesn’t look so bad in this picture, but up close and personal the bright colours seem to boast of an overly glossy exterior that doesn’t quite match the true character of the town.

Perhaps, however, this is fitting.  For the statue is of “mad” King George III who also had a publicly presented exterior that was more glossy than his true self, at least for a brief time.  In 1788-9 the king’s mental health deteriorated.  This resulted in the Commons passing the Regency Bill of 1789, providing parliamentary controls in the event of a Regency (where the king’s son rules as Prince Regent).  The bill was ready to be sent up to the Lords, but never actually got there, as George had recovered by March 1789.

All the same, George III’s doctor recommended sea air, sea bathing, and even sea drinking as a cure for a wide variety of ailments.  Thus it was that the king and his family took their holidays in Weymouth during the 1790’s, popularising the town as Britain’s first seaside “resort”.  King George III’s private bathing machine is displayed just in front of his glossy statue.

If I were put in there and wheeled out to the sea I think I would go mad too.

King George and his family spent a total 14 summers here during the period 1789 to 1805.  On first seeing the town the king announced, “I never enjoyed a sight so pleasing”.  Possibly I would have thought the same when I first saw Weymouth, but then I saw that statue, and so that was that.

Weymouth is also famous for its sand sculptures, and there has always been something on display when we have visited.  This year (by which I mean 2015 – I am posting this a whole year late) it was the Last Supper with life-size figures.  The sculptures are absolutely amazing and well worth visiting.  They stand under a purpose-built canopy to protect them from the elements.  I have no idea how long they last, but the amount of work which must go into something so temporary is impressive indeed. 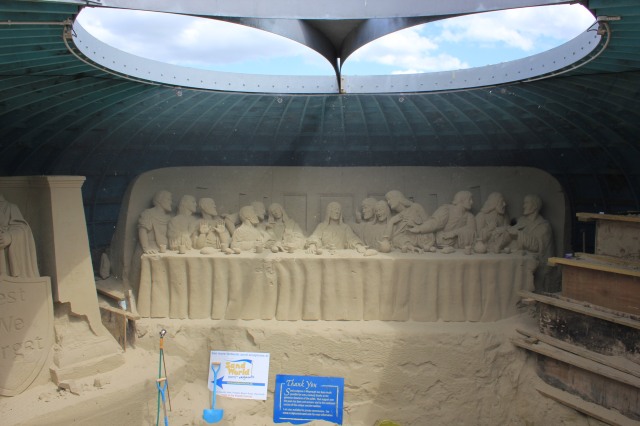 Weymouth also played in important part in World War II.  The major part of the American Assault Force launched from the Weymouth and Portland harbours on D-Day.  From 6 June 1944 to 7 May 1945 a total of 517,816 troops and 144,093 vehicles embarked from here.  The war memorial on the esplanade shows American Rangers marching along the same spot.  Three thousand of them would die that day.

Walk #81 Statistics (of which this post forms the third part):