Posted on January 6, 2016 by Wingclipped

On the Dorset coast, in the space of only a mile, it is possible to see a fantastic series of coastal features demonstrating how coves are formed.

As we walked out of Lulworth and up Hanbury Tout we enjoyed good views back to Lulworth Cove.

Lulworth Cove is the mature “finished product” (not that anything geological can truly be called “finished”).  Many years ago a river channeled through the hard rock of the coastline to reach the sea.  The sea forced its way through that breach, and wore out the softer clays behind to form a mature cove.

Right next to Lulworth Cove is Stair Hole, which is a cove in-the-making: not mature, but perhaps adolescent. 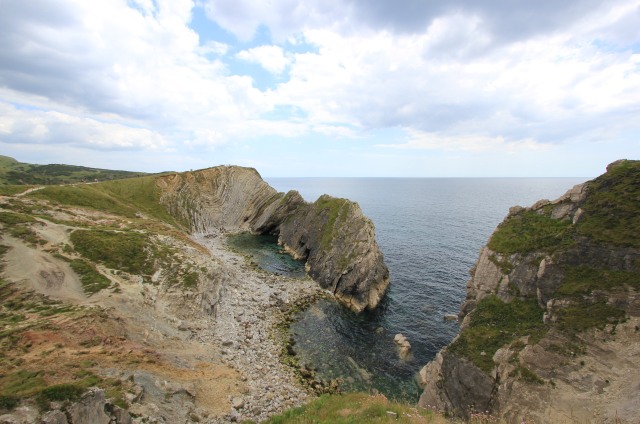 The sea has found its way in through the harder rock, and is now beginning to channel out the softer rock behind.  The harder barrier fronting the sea has not completely abandoned the fight and continues to put up a defence, but the sea is wearing it down.  Several caves and sea arches have formed and eventually the entire band will give way.

A mile further west is Man O’War Cove which, compared to Lulworth Cove and Stair Hole, could be considered middle-aged. 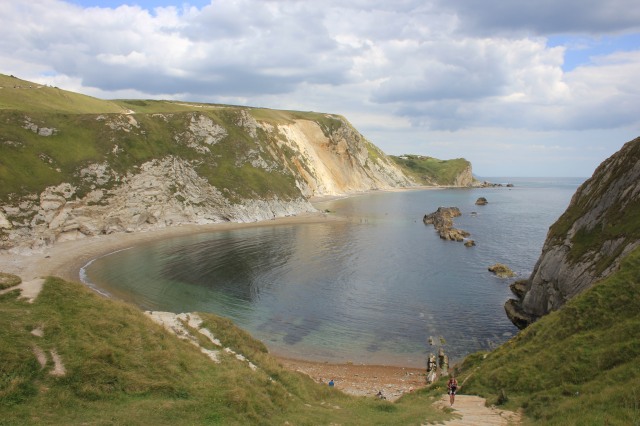 The harder rock has fallen and the sea has won the battle.  A narrow foundation of linear rocks stands out to sea, marking the line of the old coast where the struggle was fought.

At the end of this post are a series of co-ordinates which can be copied and pasted into Google Earth.  This will show a satellite view of Lulworth Cove, Stair Hole and Man O’War Cove.

At Man O’War Cove there are more impressive sections of folded rock strata, although they are not as impressive as the Lulworth Crumple one mile back in the direction from where we had come.  Can you see them?  Just to the left of the path?

It is quite an impressive headland, don’t you think?  One of the best parts of this stretch of coastline, and one of the main draws that attracts some 750,000 tourists here each year, is what lies behind it – Durdle Door.

Durdle Door is a huge natural limestone arch.  The name “Durdle” comes from the Old English word “thirl”, meaning a bore or drill; according to the Jurassic Coast Trust the name suggests the arch has stood for at least 800 to 1,000 years.

If you look closely in the rock above the arch it is possible to make out a number of large holes.  These are the fossilised remains showing where Cycad tress once grew, 147 million years ago.  The hole shown inset in the next photo stands above the arch at approximately 11 o’clock.  If you look closely (double-click on the photo to enlarge it) other fossilised holes can be seen.

Walk #80 Statistics (of which this post forms the third part):