The path heading west out of Lulworth diverts inland slightly, leading up in a shallow arc to reach Hanbury Tout 440 feet above sea level.  It then leads back down to rejoin the coast again half a mile or so later.  Here we are, at the foot of Hanbury Tout:

I say “we”, but you will see that there is only Deb in this picture.  I am taking it and that makes two.

Ben and Catherine, however, are conspicuous in their absence.

This is because after walking from Southend-on-Sea to Lulworth, across some 6 counties and 670 miles, they have decided to hang their boots up and say “enough”.

We had seen this coming for some time.  When we first started this undertaking they were 8 years old.  We were not naive and realised that they wouldn’t be with us all the way.  As they grew in age we saw the moment of their departure loom closer and closer.

Who can blame them?  At age 13 walking the coast of Britain is not at the top of their priorities.  Nor would it have been at the top of mine at that age.  We had seen the crunch point coming for about a year.  As we got further and further away from home, with longer and longer journey times, we saw less and less desire in their eyes and less and less committment in their hearts.

As I say, we anticipated this.  At age 13 they have their whole lives ahead of them.  They have school, and homework, and growing up, and finding a career, and falling in love, and finding themselves to do.  That’s a huge amount to be getting on with.  Why walk the coast of Britain on top of all that?  What’s the point?  It’s all a bit too much.

The point for Deb and I, of course, is to want the very opposite of “too much”.  We have “too much” already in our day-to-day lives.  The point is to do less in life and in so doing get more out of it.  But why should our 13-year old children be expected to know that yet?  At 13 they haven’t even started to want the “more” out of life yet, yet alone the “less”!  Give them until their 40th birthday and they may suddenly realise that the “more” they want is best achieved by concentrating on the “less”.

But for now, as is only right, they no longer want to go on their parents’ mad-cap walk around the coast of Britain  They will continue to join us from time to time, but our Coastal Clan has now slimmed down to a hardcore of two.

I really am proud that, at by age 13, they have walked 670 miles in a continuous line around the coast of this country.  When they have told their teachers they have generally been met with reactions of awe, incredulity, and yes – respect.  The meaning of those reactions have gone a little over their heads at this age, but I hope in years to come they will realise the value of them.

This is the first photo I ever took of their particular Coastal Path, at the Broomway in Essex, on 9 October 2011.  Two diddy children, dressed in whatever casual clothing we could find in their wardrobes to make the walk as comfortable as possible.

And here is the last picture, taken on 23 May 2015.  Two rather taller, hardened walkers, clad in walkers’ gear, capable of walking the entire country, although they do not realise it yet.  Maybe they’ll finish it one day. 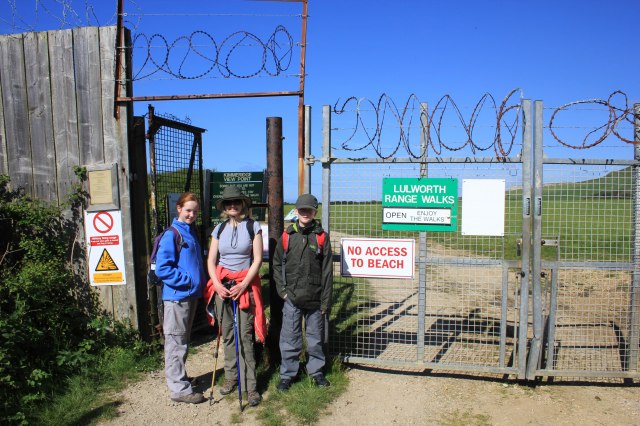 Walk #80 Statistics (of which this post forms the second part):

7 Responses to 80b – Leaving Lulworth