Arish Mell, a small beach and bay in the middle of MOD land in the Lulworth Ranges, is quiet and secluded.  This is due to its inaccessibility – it can only be reached when the range walks are open, and then only by walking just under two miles.  The effort, though, is surely worth it.

We climbed the cliff path from Arish Mell, crossed the clifftop whilst trying to swat away the plague of early summer flies, and then dropped down into Mupe Bay. 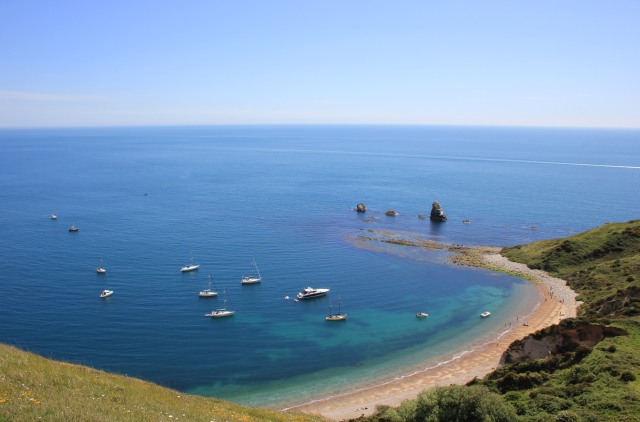 Mupe Bay also lies within the Lulworth Ranges on MOD land, and being a mile walk from Lulworth Cove is almost as inaccessible as Arish Mell, at least to those lugging heavy beach accoutrements with them.  We discovered that visitors to the bay all came via boat.  There were some very expensive looking yachts moored just off the shore.  It felt more like Monaco than Mupe.

Actually, to say these are fossilised tree trunks is not quite true; the story is slightly more complex than that.

Many millions of years ago, Purbeck was covered by the sea, but about 144 million years ago the sea level dropped.  A series of islands was uncovered and they became surrounded by lagoons and channels.  Soil formed and over time the area became a massive tropical forest, with giant cypress trees, monkey puzzles and ferns.  The forest didn’t survive, however.  It was eventually flooded by a shallow salt water lagoon and a thick layer of algae formed.  This covered the forest floor and crept up the bases of the trees.  Sediment in the water stuck to this algae, creating large cylindrical burrs around the tree bases.  The trees died in the salty surroundings and their wood disintegrated, but the burrs were made of sterner stuff.  They remained as lumps on the ground, with hollow centres where the tree trunks had been.  They now provide the most complete fossil record of a Jurassic forest anywhere in the world. 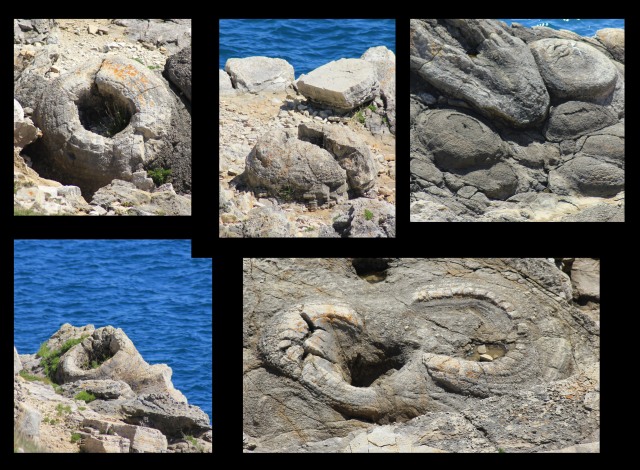 Just after the Fossil Forest we reached Lulworth Cove, marking the end of our walk (and indeed the far end of the Lulworth Range Walks).  Lulworth Cove is perfect scallop-shaped bay and a famous tourist attraction.  It was formed by a battle between water and earth.  At Lulworth Cove a large bastion of limestone rock fronts the coastline, protecting the softer clays behind it.  At some stage a stream channelled its way through the limestone, flowing out into the sea and slowly eroding the rock to form a small valley.  As the valley became larger it was eventually breached by the sea, which made its way passed the limestone and started eroding the clays behind, hollowing out the cove.

May years ago, when our children were little, we had a week’s holiday in Weymouth with my wife’s parents.  We decided to take the kids to Lulworth Cove and go fossil hunting.  There aren’t many fossils to be found at Lulworth as far as I know, except for Fossil Forest of course, but those fossils are a little big to pick up and cart off, and the authorities certainly wouldn’t thank you for trying.

My wife’s father was ill and couldn’t come with us to Lulworth, but he was very excited for the children.  He went to a local shop and bought some gemstones, giving them to my wife on the morning of my trip.  Later in the day we combed the shingle for fossils.  We were there for quite some time.  I found nothing and the kids found nothing, but every now and again my wife shouted in glee – a gemstone!  These things were incredible and the kids were amazed.  They had been so highly polished by the sea that it was as if they were shop-bought, and incredibly my wife found them in pairs – one for each child.

When we got back my father-in-law asked how the trip had gone.  “Oh it was great,” my daughter said.  “Dad was really bad at finding fossils but mum found loads!”.

A few years alter the kids discovered the truth behind this event.  I thought that would restore my reputation, but the idea has stuck.  I am still known as the worst fossil finder in our house, and my wife the best.

Walk #79 Statistics (of which this post forms the final part):