The Coastal Path in Malta

In April this year we went off to Malta and experienced some coastal walking there.  We were told Malta is a “marmite country” – you either love it or you hate it.  I loved it!

Early morning was a good time to start, I discovered.  Most days I got up at 6:30 am to watch the sunrise.  The sun started off blood-red as it crept over the horizon, gaining colour as it rose.  As it cleared the water, it seemed to almost drip back into the sea as it melted in its own warmth. 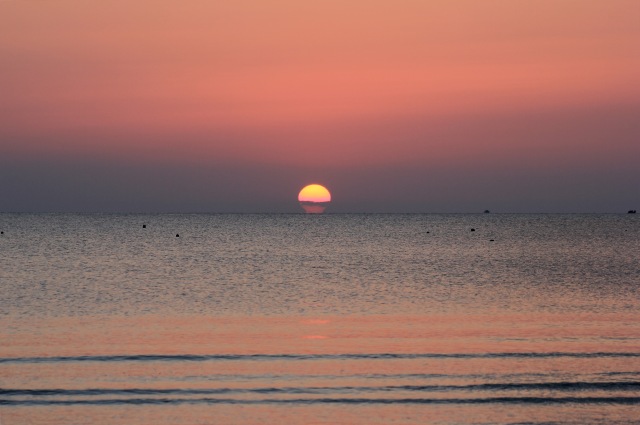 Soon enough it was clear of ther water, rising with an almost visible speed and warming everything up.  I suddenly realised that I would be carrying my fleece rather than wearing it. 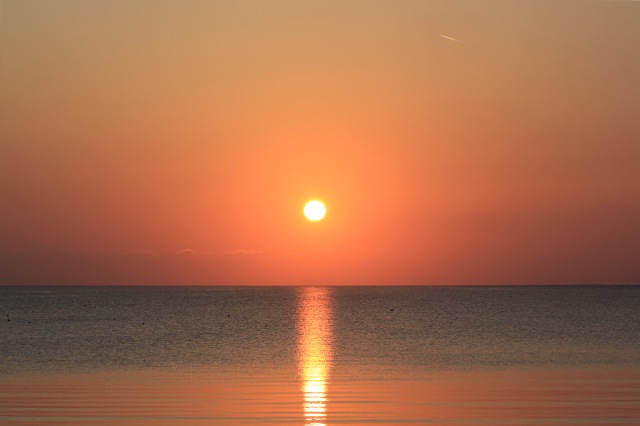 The Maltese coastline is spectacular.  We didn’t walk through much of it, but what little we did shows what is on offer. 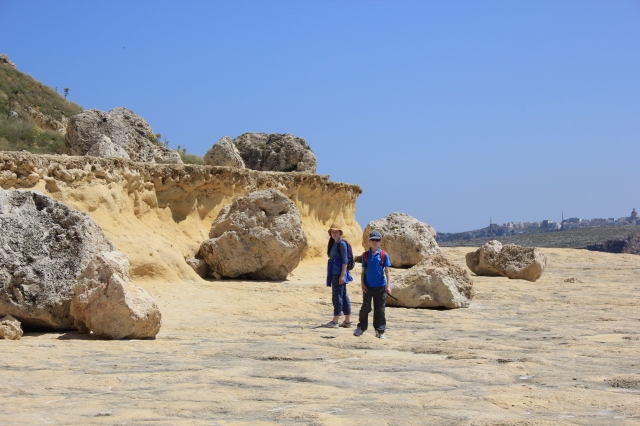 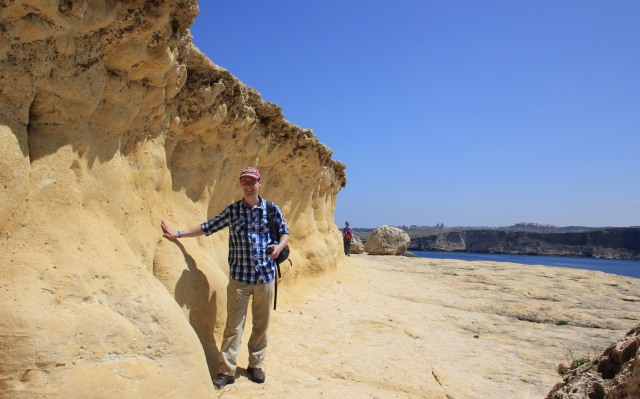 …with boulders as big as houses littered across the shoreline. 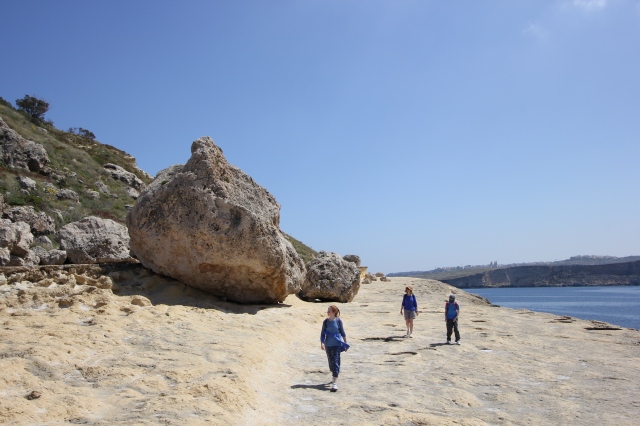 We could hardly fit the biggest boulders in our camera frame, but they made for some interesting climbing. 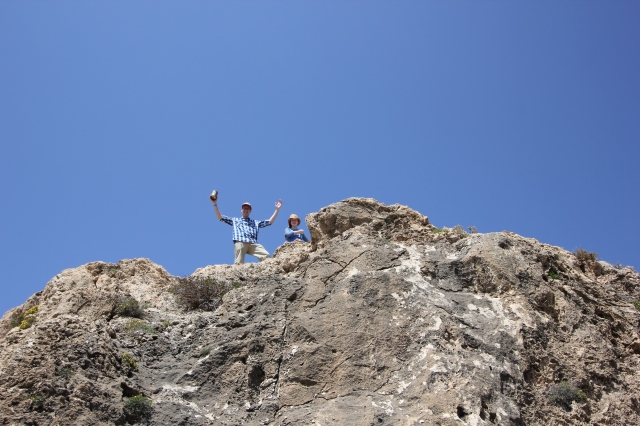 We walked around the capital city of Valletta, with coastline paths in front of the city walls hewn out of the rock. 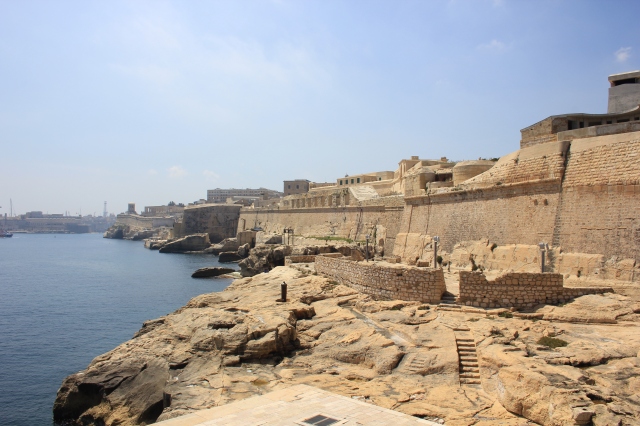 Malta suffered particularly badly during World War Two; fortifications in the city walls were still very much in evidence. 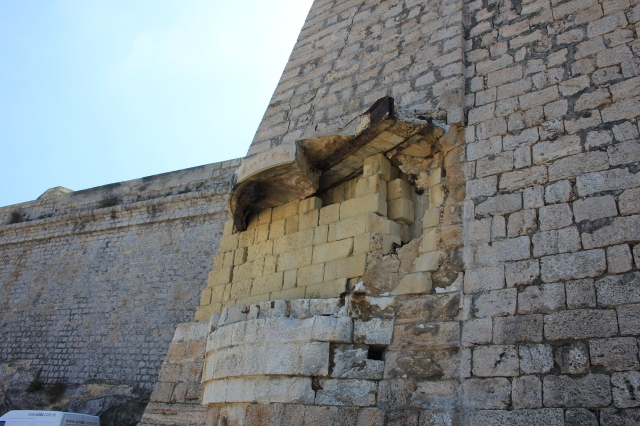 Sea arches seemed to be everywhere, but the most impressive was the Azure Window on Gozo, the second largest island.  You can see the scale of it by the size of the boat in the next photo. 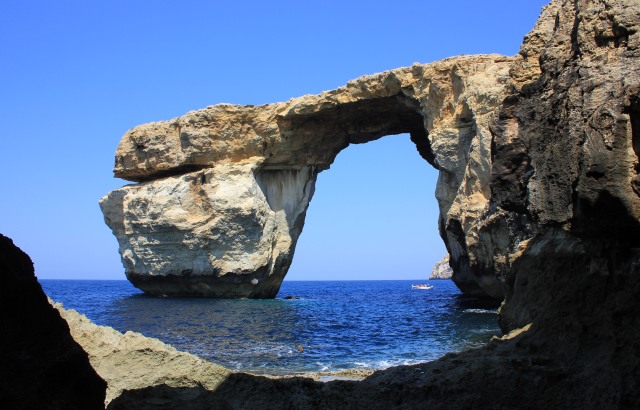 They say the Azure Window will only last another few years; it is in imminent danger of collapse as the sea wears away its base.

You can take a boat trip out to see it from Dwerja (the “Inland Sea”) a small lagoon a couple of hundred metres away, which was formed when water flooded in through a 100 foot long cave.  Local fishermen operate small boats, taking tourists through the cave and out to the Azure Window. 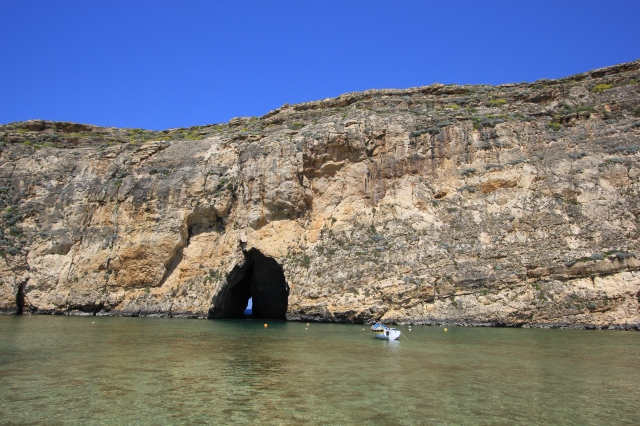 We also visited Comino, the third largest of the islands.  Large ships do not visit here and there are no roads.  Comino is best known for its Blue Lagoon, where boats seem to float on air instead of water. 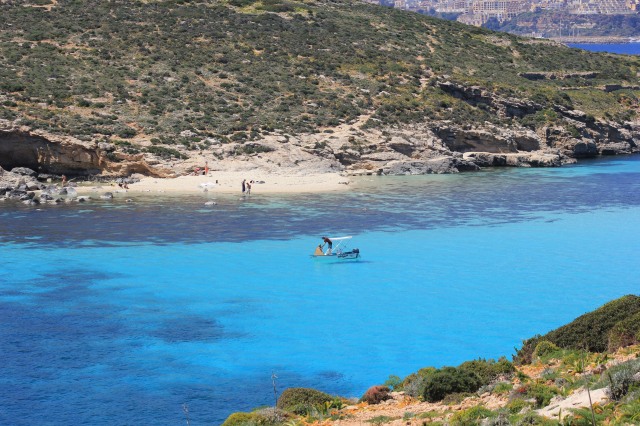 Don’t swim too far towards the entrance of the lagoon, though.  There are strong currents and a few weeks after we were here two British holidaymakers were drowned.

Comino is heaving at the popular tourist spots, but otherwise virtually deserted.  We walked around half of the island, finding only one house and a tiny graveyard during our travels.  We also found this strange small hut on the southern shoreline.  What it was I do not know.  Look – another sea arch in the background! 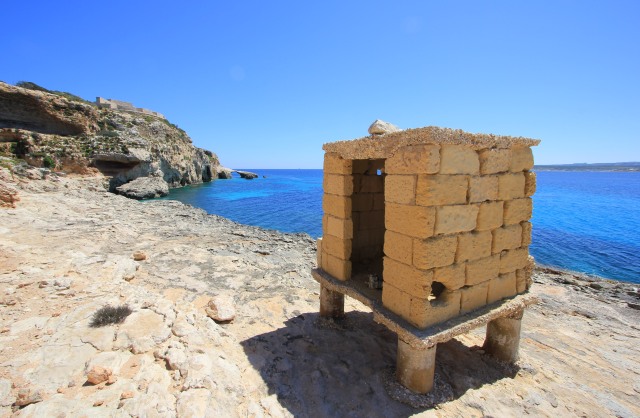 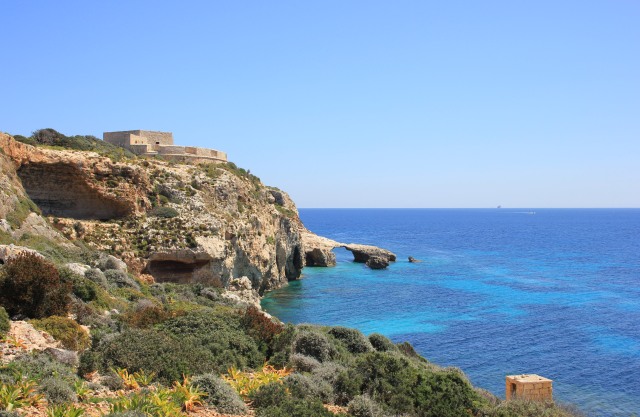 Comino had a lot of sea arches… 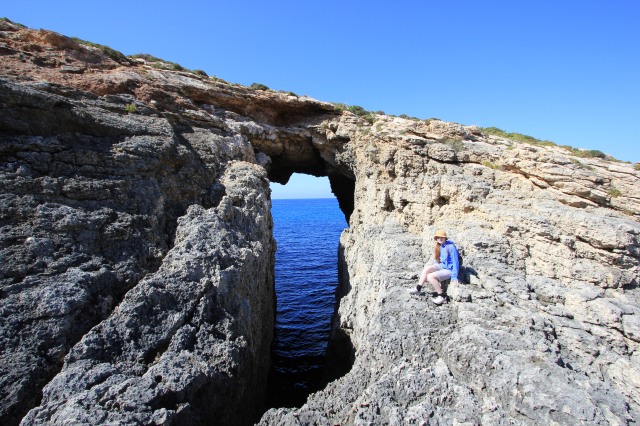 I liked this one at the Blue Lagoon. 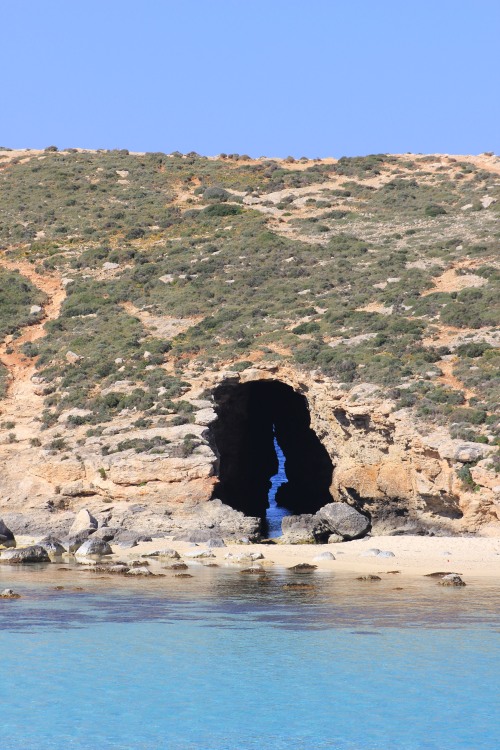 Where there are sea arches there are surely caves; we stopped off at the Ghar Hasan caves on the main island on our way back to the airport. 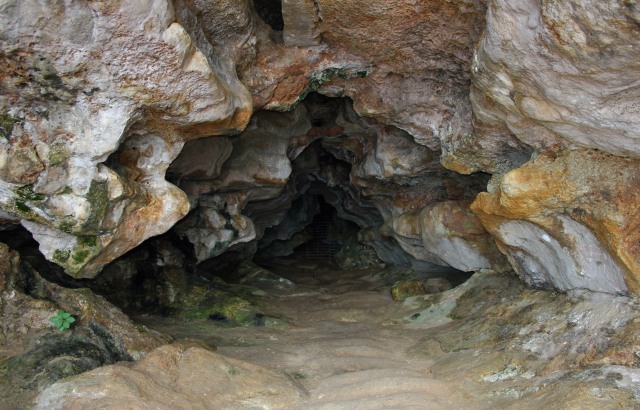 There is no real health and safety here.  No guards, gates, or warning signs to sully the spirit of adventure.  This was fresh nature, ready to be explored.  Well ok – there was that metal fence with a sign on it (you can see it in the background) which seemed to have been chucked up as a half-hearted gesture, but it was clear from the footprints that it was roundly ignored, and the passages leading off from the main cave before the fence were not barricaded at all.  Armed with only the torch on my phone we ventured in. 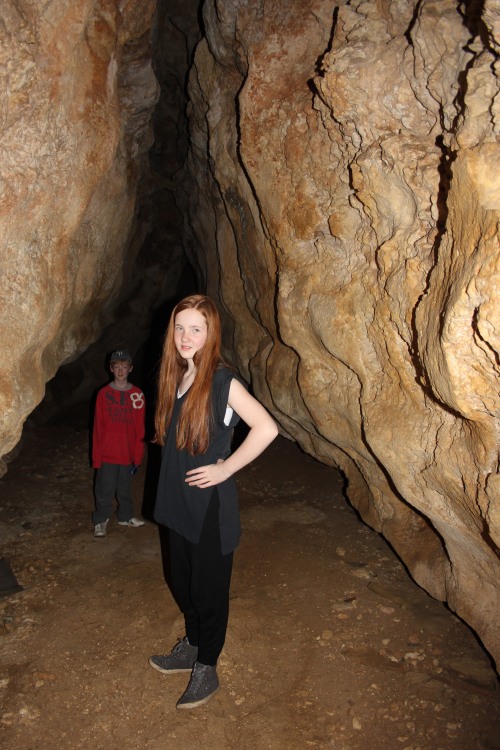 At first we could stand at full height, but as we got deeper inside the maze (and it was something of a maze in there) the ceilings got lower and lower and the atmosphere more and more clammy and muggy.  At one point we went down a tunnel that got smaller and smaller, until we could only creep through it by squatting like cave frogs.  Of the three of us only I had a torch, so we made our way through the claustrophobic squeeze whilst fighting our own shadows.  As soon as one of us got in the way of the torch the others were plunged into darkness.  At one point we turned the torch out completely – it was pitch black.  The tunnel eventually petered out into nothing; we had to retreat and take another branch.  You can just see the kids in the background of this next picture. 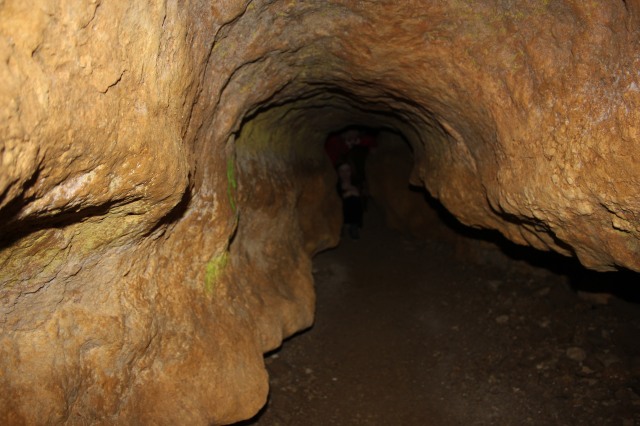 We didn’t have time to explore the caves in full.  We probably saw about 300 metres of them but I suspect they go much further than that.  But we had a plane to catch, so made our way back to emerge into the bright light of day drenched in sweat and dirt (the airline staff must have been overjoyed to see us).

5 Responses to The Coastal Path in Malta