Just beyond the Tilly Whim Caves we passed the Anvil Point Lighthouse.  Built in 1881 and opened by Neville Chamberlain’s father, it was still in use some 134 years later, guiding Channel-going ships away from the coastline.  Today it is fully automated.  The old lighthouse cottage can be rented out at upwards of £483 per night – it sleeps six which I suppose spreads the cost somewhat…

Beyond the lighthouse we hit a mire of mud.  For half a mile we slipped and slid our way.  It felt like more; progress was slow. 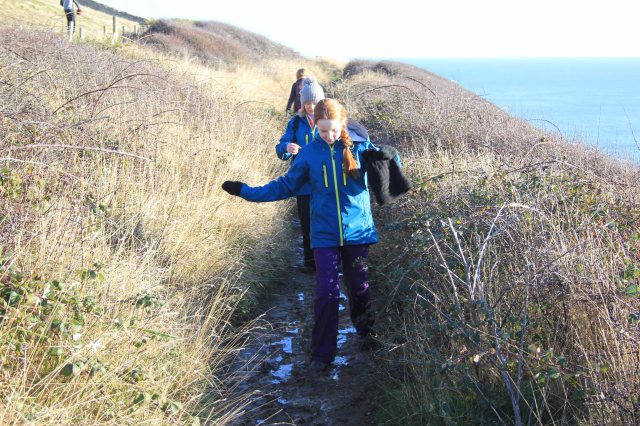 To our right the landscape rose to form a high ridge.  This was only 100 metres or so inland and because of its elevation afforded panoramic views over the coast.  We saw other walkers up on the ridge above us and decided to opt for the same.

But there we met a different obstacle.

I cannot say that we have any deep rooted prejudice against cows.  We are, however, wary of them.  Many miles ago, in Kent, we were expertly herded out of a field by an entire crush of them.  They had been lying down and eyed us lazily as we made our way across their hallowed turf.  Then one cow slowly stood up.  Another followed, then a few more, and then the entire herd which must have amounted to some 50 or so beasts.  They all stood up with a distant rumble which to us gave fair warning that these were very heavy animals indeed and not to be trifled with.  They stood and stared at us bit more at first, observing our progress and making it quite clear that they were in control and that we were not.  Then they made their move.  They approached with a deliberate speed – the sort of speed which is best described as “constant”.  In other words, they were coming our way and if we didn’t get out of their field us they were not going to stop.  We were rounded up (like cattle!) and sent scurrying on our way.

We have been slightly wary of cows ever since, and I repeat these ones had very pointy horns. 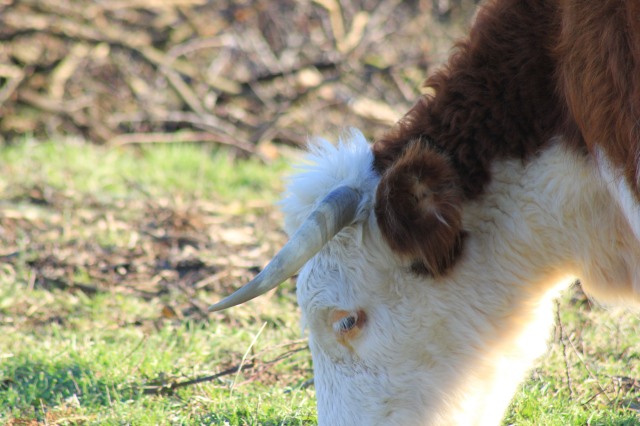 It turned out, however, that these cows were well used to walkers.  They eyed us with disinterest and allowed us to continue unmolested.

Off we went, relieved, passing a pair of Mile Indicator Posts. 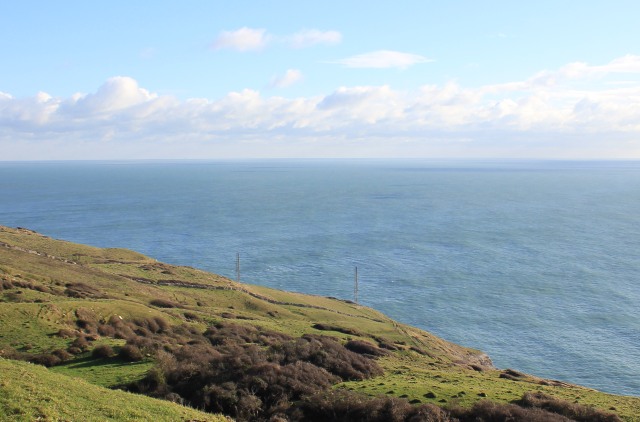 Exactly one nautical mile to the east of the posts we now observed were a similar set, at the Tilly Whim Caves.  They are used by passing ships to measure their speed.  These ships line up the first pair of posts and then mark the time it takes until they have reached and lined up the second pair.  Why they do this, in our modern age of satellite navigation systems, is beyond me.  We were less interested in these than in our next destination, which strangely enough was more or less an exact mile away:  Dancing Ledge.  We couldn’t see Dancing Ledge at this point; it was nestled into the coast between our current position and St Alban’s Head in the distance.  But it was there, waiting for us, and I was looking very forward to it.

Walk #77 Statistics (of which this post forms the fourth part):