Although walking the coast of Britain is our main aim, we also have a little side mission.  This is to visit as many of the towers that make up the World Federation of Great Towers as possible.  It’s not so much because we have a thing for towers.  It’s just that most of them are located all over the world and in places we have never been to before.  It was partly to claim our fifth tower that we went to Prague in December 2014.  The Žižkov Tower (aka the Prague Television Tower) sits to the east of the city centre.  From many angles it dominates the skyline.

Construction began in 1985; it took six years to complete and the Žižkov Tower was finally opened in 1992.  Although it was designed and started in Communist-era Czechoslovakia, it was finished after the fall of the regime.  Still, it is said that the citizens of Prague generally disliked it, in the same way that many citizens of Communist-era countries disliked other megalithic, dominant structures that would sometimes slice into their skyline as a symbol of Communist might.  However, in the case of the Žižkov Tower there was added criticism, for the construction was said to have destroyed parts of a particularly old Jewish Cemetery next door (something denied by the authorities, who claimed the affected parts were moved prior to construction).  The cemetery was founded in 1680; what remains of it still sits right next to the tower.

On the outside of the tower, and at least as famous as the tower itself, are giant faceless babies.

These babies are a design by artist David Černý, and were temporarily fixed to the tower in 2000 when Prague was a European City of Culture.  They proved to be so popular that the following year they were put up again, this time permanently.  There are ten of them, crawling up and down.  Are they supposed to bring a childlike, innocent, softening effect to a building many still consider to be an eyesore? No, I think not, for if you look closely you will see that their faces have been bashed in.  These faceless, oversized infants crawl on the heels of their hands, their fingers spider-like and looking as if they are ready to pounce on anyone foolish enough to get too close.  They resemble ants guarding their nest.  Some consider them to be as monstrous as the tower they swarm over.  They would go well in an episode of Dr Who. 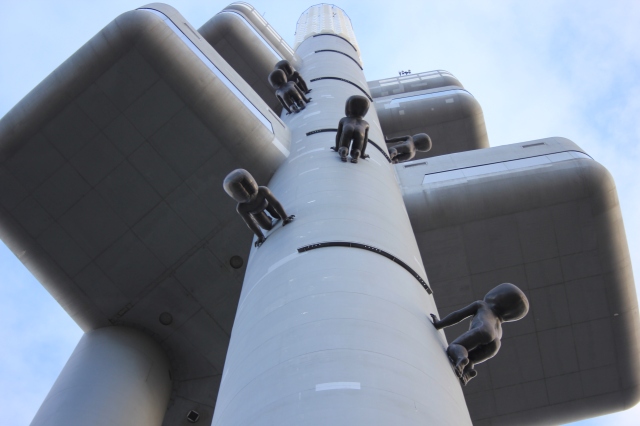 Although the tower stands at 216 metres (709 feet), the viewing platform itself is considerably lower, at 93 metres (305 feet).  It consists of three rooms.  One has a series of plastic glass chairs hung from the ceiling.  They act as a sort of cocoon to anyone sitting in them and some sort of noise is broadcast into them from a speaker.  You can only hear it when sitting in the chairs and even then it was too quiet for me to really understand what it was.  It sounded like whispering.  Perhaps it was the babies trying to entice me towards the clutches of their poised fingers.

And as for the other two rooms?  One had a few bean bags strewn around the walls.  I can’t even remember what was in the other.  It wasn’t the most welcoming of places.  No matter – I was less interested in the furniture than the views, which were far-reaching. 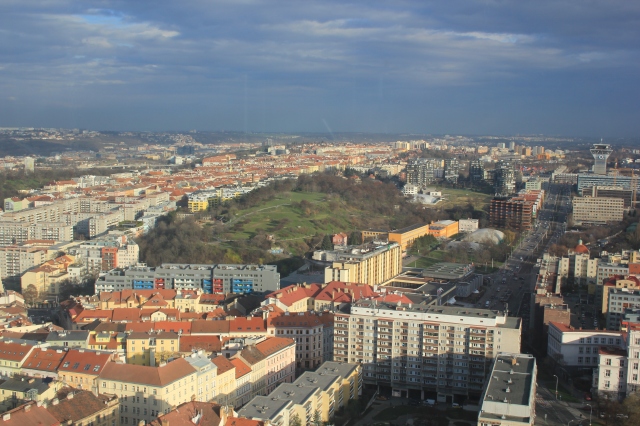 I feel as if I have been a bit harsh on the Žižkov Tower, and I haven’t even mentioned the copious dollops of dog poo that littered the majority of the pavements (and, eventually, one of my boots) as we walked up to it from our hotel in the city centre.  Oh dear!  But although the Žižkov Tower is somewhat disappointing internally, I actually quite like both the tower and the babies from the outside.  It is a bit out of the way, but still worth a visit.  Just watch out for all that dog poo as you make your way over to it!