As we flew back to Glasgow our aircraft punched through a blanket of low-lying cloud-cover.  We left an underbelly of grey dreariness and rose into a stunningly bright sky of crisp, clear colour.  The cloud was low this morning, and as we reached the mainland we flew over an isolated group of hills.  Their peaks had sliced through the cloud and their definition stood in contrast to the muffled whiteness all around them.

I wondered where we were and what peaks we were looking at.  Had our plane looped south over the hills of Arran?  Or had we gone north, over the Cowal Peninsula and Arrochar Alps?  I had no idea.  One thing I did know, however, were that these hilltops were probably only 2,500 to 3,000 feet high.  Despite the early hour, there might be walkers or climbers standing on those ridges, lucky enough to take in the velvety view all around.  What an incredible sight to see.

Many years ago, in March 1989, I was lucky enough to get above the clouds during a trip to the Lake District.  I still have a couple of photos.

I was walking up Scafell Pike with some friends.  Snow was still on the ground, but the sun was out and it was warm enough to walk in t-shirts.  We had tramped up during a morning in which the cloud had threatened to burn off, but didn’t.  We watched it fall in a veil, slowly and silently down the mountain’s valleys. 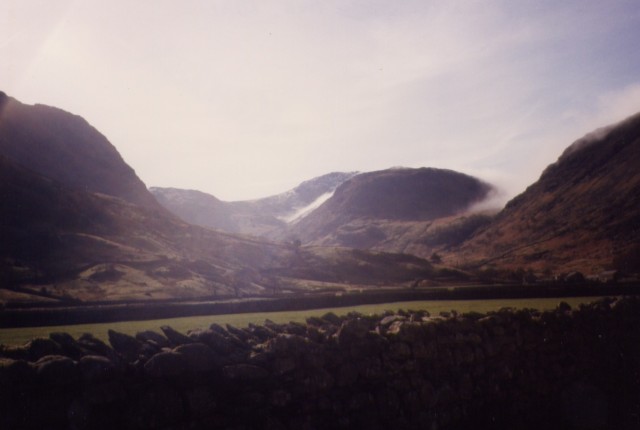 We entered the cloud base at about 2,000 feet.  As we reached the boulder field which lies just before the summit we exited the cloud and were greeted with a view that felt almost Himalayan to my way of thinking – I had never seen anything like it before.  The cloud was not all encompassing, so we could see down valleys to distant towns and villages, but if you looked off in one particular direction these breaks in the cloud disappeared.  All you could see were nearby peaks poking their heads out to join us, acknowledging their height and ours.  The snow blended into the surrounding landscape which stretched away before us; it felt as if we were walking on the clouds themselves. 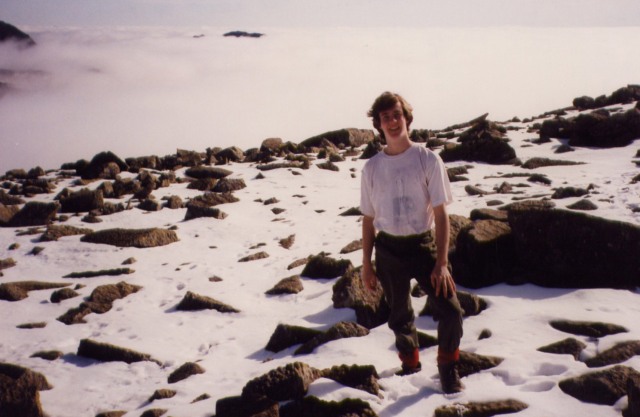 I hope to experience that again some time.

Flying back from Islay that day reminded me of it.  I hope someone was up on those ridges to see that view.

7 Responses to The Coastal Path in Scotland – Leaving Islay