Hurst Spit was a bit of a shingly trudge, to be honest.  As we made our way along it I thought forward to Chesil Beach which waited for us some 40 miles and a few walks on.  It is about 7 miles longer than Hurst Spit.  Would we venture out onto that (or would we take the alternative “inland” route which follows the coastline rather than the spit) and if so how would we find it?  They say that walking the 10 miles of Chesil Beach shingle is really like undertaking a 20 mile walk on normal ground.

During the period August 1996 to January 1997 Hurst Spit saw some major stabilisation works.  These were extensive, involving bringing in 124,000 tonnes of rock from (mostly) Norway and dredging of 300,000 cubic metres of shingle.

Coastal protection and stabilisation is a big issue.  During the winter of 2013 and early part of 2014 storms battered the UK, hitting the southern coast of England quite hard.  It was around this point in our walk that we began to see for ourselves just how devastating these storms had been.  Look!

At first glance you may think this beach, at Milford on Sea, looks quite normal.  But look closer, at the cliff edge: 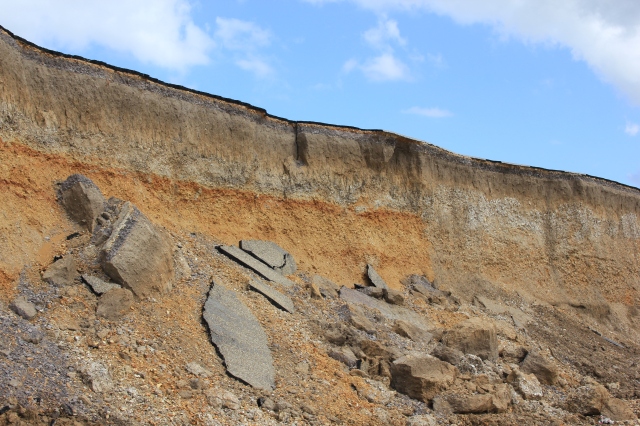 Layers of tarmac and hardcore were visible at the cliff top.  The cliff looked as if it had been cut with a cake slice.  Flat slabs of tarmac lay on the rubble below – almost as if the cake had been reduced to crumbs.  The entire cliff path had been demolished.  A little further on we saw a fence which also illustrated the extent of the erosion.

Just after we passed this fence we climbed a set of timber steps up to the cliff top.  There, we found a banner erected by the Council.  This proclaimed that storms in February 2014 had caused the loss of 4m of the cliff here, as well as destroying 75 beach huts, 30 of them concrete-built.  Remember all that shingle that was brought in to Hurst Spit in 1996 and 1997?  Well 100,000 tonnes of it was lost during the storms.  The Council had done quite a bit of work to repair all this damage by the time we arrived in mid-April, but there was still a lot more to be done.

Be prepared for a lot more storm damage in the miles to come; entire sections of the coast were ravaged.

Walk #70 Statistics (of which this post forms the third part):

9 Responses to 70c – Hurst Castle to Milford on Sea