We only had a day and a half in Brussels, so zipped from one tourist attraction to the next.  There’s a lot of grandeur to be seen.  For example, here is Grand Place.

And the here is Place des Martyrs – how could you not fall to the ground and lament with the angels, they are so sorrowful?

But one of the most impressive things we saw was rather more contemporary and particularly unexpected.  Of all things – it was a lifesize cement truck!

This sculpture stood in relative obscurity, off the beaten tourist track.  It is by Wim Delvoye, a Belgian artist who I have discovered has a reputation for inventive and shocking projects.

Wim Delvoye achieved international recognition with his work Documenta XI which is a symmetrical mosaic of glazed tiles with photographs of his own poo on them.  Shocking?  I’m not so sure in the art world.  Indeed, his best-known work is Cloaca, a large transparent machine which is fed food at one end, digests it, and churns it out as fecal matter at the other.  It is said to be a statement about the futility of modern life.  The product of this artwork is collected, vacuum-sealed and sold to art collectors the world over!  Surprising maybe, but am I shocked yet?  No, not really.

I am a little more shocked by what some call his “sexrays”. He painted small amounts of barium on the bodies of some of his friends who then performed for him whilst he took x-ray photographs.  Shocking!  And if that isn’t shocking enough, the x-ray plates were then put in to a stained glass window for presentation!  (“But was it true love as well as true sex?” I hear you ask!  Nah – that wasn’t true love.  I could see right through it!!!).

Shocked yet?  I won’t tell you about another of his works then, involving lipstick, pieces of hotel stationery and, I hope, a shower afterwards.

You cannot mention Wim Delvoye, however, without talking about pigs.  The artist is well-known for tattooing live pigs in his “Art Farm” project.  This practice was declared illegal by a Belgian court, so the Art Farm is based in Beijing .  Why does Delvoye do this?  Because pigs are generally associated with negative characteristics such as dirt and gluttony.  The artist draws parallels with the fact that the colour and texture of pig skin is so close to human skin.

And spare a moment for poor old Tim Steiner, who agreed to let Delvoye tattoo his back (complete with tattoo signature over his right buttock).  Three times a year Steiner becomes a living exhibit, displaying the work at art galleries.  When he dies his skin will be harvested and sent to a gallery owner who will then be able to resell the work to another collector.  Since getting the tattoo in 2006 Steiner complains he has only spent 30 minutes alone with the artist who said, “We became friends but I had to explain that he was 2006 work and that it’s 2012 now, and therefore I’m in another period of my work.”  Nice!  There are a few people I am thinking of trying that line on!

So yes, perhaps Wim Delvoye deserves his shocking reputation as the bad boy of contemporary art.

Whatever you think about Wim Delvoye and his more shocking art, however, you cannot help but be impressed by his gothic sculptures.  Wow! 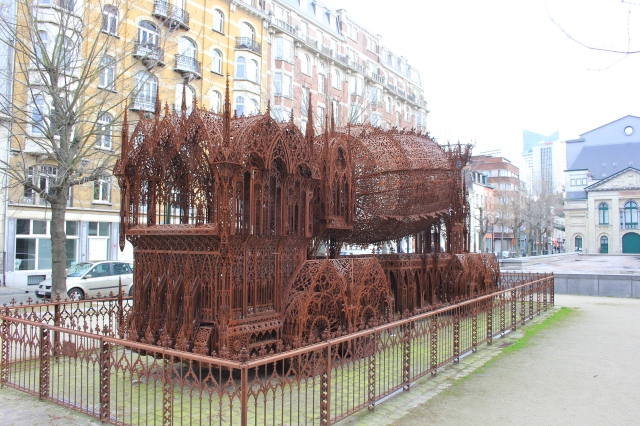 It is no small surprise that the Brussels authorities chose one of his less controversial pieces for public display, but we were still surprised, shocked even, to find it slap bang in the middle of a quiet city street.  The piece, called “Cement Truck” is one of Delvoye’s works which involves taking metal, laser-cutting it into gothic filigree and then piecing it together to form massive construction vehicles. 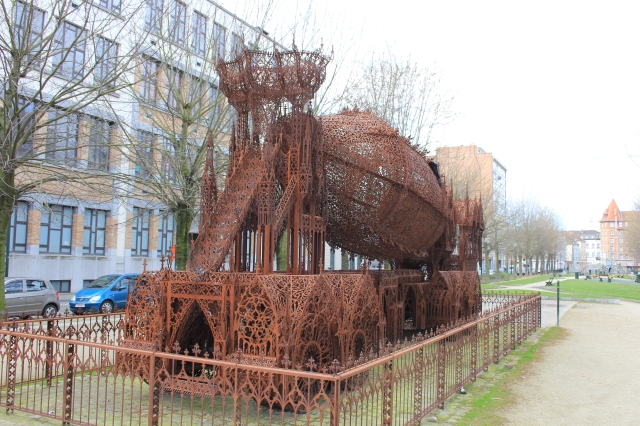 Look at the intricate detail!

We often wander away from the main tourist routes when visiting foreign cities.  Finding little unexpected gems like this is one of the reasons why.

Location of the Cement Truck (copy and paste the co-ordinates into Google Earth):

2 Responses to The Coastal Path in Brussels – Cement Truck