As we walk around the coast of Britain we come across quite a few places where we would like to stop for a while.  In most cases there is no time; we have an entire country to walk around and need to push on.  The Diving Museum at Stokes Bay anticipated our quandary, however, and was kind enough to place some of its exhibits outside where we could see them as we passed.

The first item on show was a diving suit which surely also acted for the inspiration behind Robby the Robot in Forbidden Planet?  Can you imagine being sealed shut inside that suit and dropped into the middle of the ocean?  No thanks!

Next to Robby was an observation bell – a record-breaker!  In June 1956 this very bell carried George Wookey when he became the first person to descend to 1,000 feet in an observation bell.  Robby the Robot and now someone called Wookey – this is all very suitably sci-fi, don’t you think?!

Next to the observation bell was a deep compression chamber – also a record-breaker!  In 1970 it carried the first men to achieve a depth 1,500 feet using an oxygen-helium mix, and in 1980 it achieved the world’s deepest trimix dive when divers reached a depth of 1,968 feet breathing an oxygen-nitrogen-helium mix. 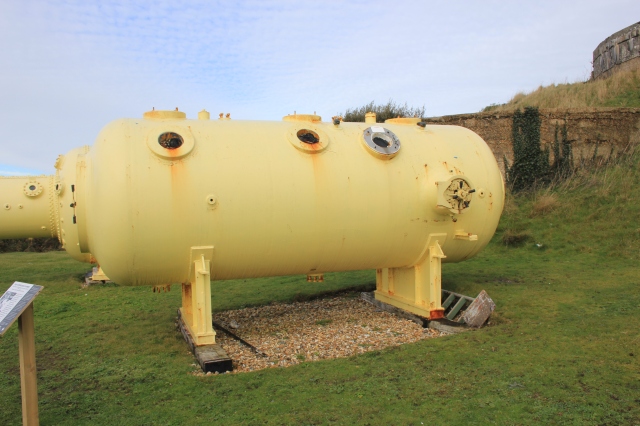 In 2001 I had to do some hypoxia training in a contraption which was not dissimilar to this.  But I was not going down to the depths.  I was being taken up to the heavens, or at least that was the simulation.  Rather than air being pumped in it was sucked out; we were “taken up” to a simulated altitude of 30,000 feet.  There I was, sitting with a military test pilot, a Tornado fighter pilot, an information officer from a Nimrod spy plane and others – feeling very out of place, but at the same time enjoying a little boy’s dream come true – what company this was!  We paired up; I buddied with the Tornado pilot.  Off came my oxygen mask whilst he observed.  I took a gulp of air.  I had been wondering, in my naivety, if I would have to gasp for breath in the thin atmosphere, but actually breathing seemed perfectly normal.  Then we were then given some simple tasks to do.

“Nic, write your address down,” said the course director whose name I recall being John.

I wrote my address down on the clipboard I had been given.

I wrote down my old address.  I was sure that the small delay in recalling the postcode was because I hadn’t lived there for a few years.

“Now write down 105, and start taking away six at a time.  Just keep going,” said John.  It was when I had to deduct six from 81 that I realised this was a little harder than I thought.  Was I getting slower?  I looked up.  The red plastic warning siren opposite me looked distinctly foxy in colour and not the bright red I was expecting.  No matter.  I looked back down again and tried to carry my sums into the 70’s, but almost immediately the clipboard was pulled away from me and John thrust a tray onto my lap.  It had a jigsaw on it.

“See if you can do the jigsaw, Nic!” said John.

I was furious!  And embarrassed!  Not a single piece completed!  A few minutes earlier, when he had to take his mask off, the Tornado pilot opposite me had finished the entire puzzle!

“How do you feel Nic?” asked John.  “Tell me what emotions you are experiencing and how you think that went”.

I told him that I felt a bit put out that I hadn’t been allowed to finish the jigsaw; in fact I was quite angry that he had stopped me.  I’d hardly had it when it was taken away again.

“Interesting,” said John.  “How long would you say you’d had it?”

I told him a couple of seconds.

John told me he’d timed how long I had been holding the jigsaw.  It was about a minute and a half.  For the last 45 seconds or so, after I had put the centre piece down in the middle of the tray, I had just stared at it catatonically and done nothing.  John, who was a very amiable man with a friendly smile, told me that I had passed the point of no return.   I had been completely unresponsive when he had called my name.  My lips and fingernails had turned blue.   Had he not put the mask back on I would have died without even knowing it.

He also told me that high emotions and the dulling of colours were also signs of hypoxia, and easy to miss if you are not looking out for them.  When I had noticed the dulling of the siren and my slowing at doing simple maths, that was probably my only chance to realise that hypoxia was setting in and do something about it whilst there was still time.

Have you ever wondered why they tell you to put your own oxygen mask on before helping others on a commercial airliner?  Hypoxia is why.  It sneaks up on you and you don’t even realise it.

But enough of all this reminiscing!  We’re supposed to be walking!  I told you we had no time for stopping off, didn’t I?!  Onwards!

Walk #66 Statistics (of which this post forms the fifth part):