The Coastal Path in Berlin – The Holocaust Memorial

Posted on January 4, 2014 by Wingclipped

Just to the south of the Brandenburg Gate is the Memorial to the Murdered Jews of Europe, otherwise known as the Holocaust Memorial.  Officially dedicated on 10 May 2005, the memorial had been 17 years in the planning.  It occupies a site of just under five acres in the very centre of the city, standing as a memorial to the genocide of World War Two.

The memorial consists of 2,711 blocks of concrete, called stelae.  Each one is the same size, but at a different height.  They have the appearance of sarcophagi, and you cannot help but ponder the countless lives lost as you wander among them.  They are ghost-like.  The memorial is freely accessible, and can be entered at any point.  The stelae are lower at the perimeters, gaining in height as you move inwards towards the centre.  They enclose you as you move further in, towering over you and hemming you in; the tallest is just under 8 metres high.  They are arranged in neat rows, like silent sentinels, yet the ground upon which they stand undulates and many of them lean at a slight angle.  The different heights and slight angles brought an individuality to each slab, I thought. 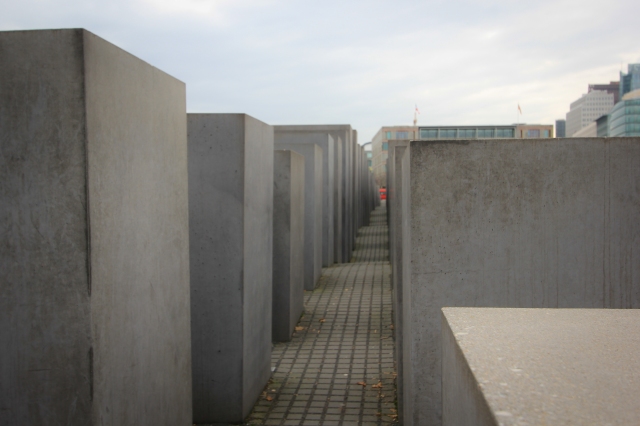 We wandered through the memorial, every now and again turning.  I soon lost sight of the others and walked further in, deeper and deeper, twisting and turning with no particular sense of direction.  Eventually I thought I had better find my family.  I walked back out again, looking along each line of sight as I went, twisting and turning again to cover both horizontal and vertical axes.  They were nowhere to be seen until, suddenly, there they were.

Underneath the memorial is an information centre, providing a timeline of the Jewish persecution by the Third Reich, and documenting the fate of some of its victims.  We would have liked to have visited this, but we arrived before it had opened and the rain was starting to fall.  We started our walk back to Alexanderplatz.

It was a pity we did not get to see the Information Centre, however, even without this the memorial itself was a remarkable and emotional place to visit.

Berlin Day 1 Walk Statistics (of which this post forms the final part):

This entry was posted in Germany and tagged Berlin, Holocaust Memorial, stelae, travel. Bookmark the permalink.

2 Responses to The Coastal Path in Berlin – The Holocaust Memorial