As we rounded the southern edge of Thorney Island and started our way back north, we passed some strange looking structures out in the water, just beyond the shoreline.  It took me a moment to realise that these would have been navigational aids, guiding aircraft in to the runway just to our right.

Just beyond this we discovered a quiet corner of the island that gave us the most unexpectedly poignant experience of today’s walk.  There were two memorial benches on a small piece of grass, looking out to Emsworth Channel.  One was dedicated to Corporal Sean Reeve of the 63 SAS Signals; the other to Acting Lance Corporal Steve Jones of the 264 SAS Signals.

Both benches had ammunition boxes next to them, secured on a post.  Inside these boxes were Books of Remembrance, including photos of the men.  We walk passed so many benches dedicated so so many people; it was good to connect to these two faces of men now gone. 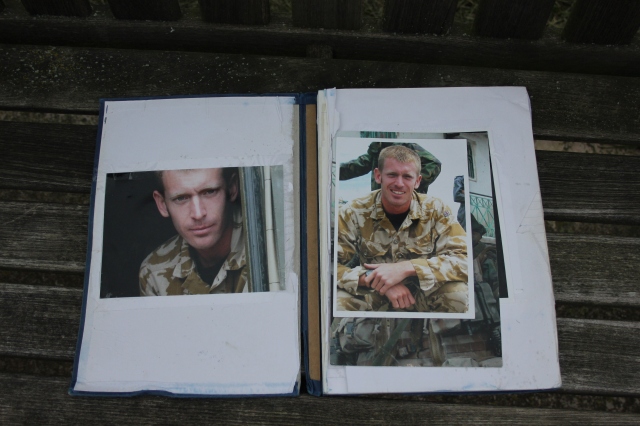 Corporal Sean Reeve was 28 when he was killed, with three others, when their vehicle was blown up by a roadside bomb in Afghanistan in June 2008.  He lived in Brighton and used to fish off both Shoreham Pier and Brighton Marina.  This is perhaps an odd thing for me to mention, but to me this was a strange co-incidence with our path around the coast of Britain.  We have walked along both Brighton Marina and Shoreham Pier during our Coastal Walk.  After over 400 miles, Brighton Marina was the first place we saw a fish caught; Shoreham Pier was the second.  We have not seen a single fish caught since then.  I read nothing into this.  It is simply a detail I could not help but notice.

Acting Lance Corporal Steve Jones, aged 25 when he died, was one of ten personnel killed when their C-130 Hercules was shot down north west of Baghdad in January 2005.  His parents chose this place for the memorial bench because Hercules aircraft once flew from here.

What is particularly sad is that, in both cases, the deaths of these men and their companions were considered to be preventable.  I remember when Sean Reeve died, as it was widely reported in the press that he and his colleagues had to use the more lightly armoured Snatch Land Rover they were travelling in due to vehicle shortages.  Their commander had requested replacement vehicles but had been refused.

The Hercules Steve Jones had been travelling in was not fitted with explosion-suppressant foam, something considered to be one of several  “serious systemic failures” in the RAF at the inquest to his death and the death of his colleagues.

These are sad facts; facts which perhaps one might find easier to forget and not dwell upon, but of course it is important to recognise, remember, and do something about them.

It is safe to say that my son had not been in the mood for walking today (nor for the four-hour round trip it took to get us to get here).  Although I had told him that we should be back in the car by 12:30 that afternoon, we arrived back late.  We found ourselves sitting at both benches for a while, contemplating the loss of these men and so many others.  Our walk was the weekend after Remembrance Sunday, and it was clear from the fresh poppies and other flowers that the families and friends of Sean Reeve and Steve Jones had come to visit recently.  We wrote in both books, before wrapping them back up in their protective bags and locking the ammunition boxes.  Then we headed off, continuing on our way.

Walk #61 Statistics (of which this post forms the third part):