The Coastal Path in Amsterdam – The Amsterdam VOC

Posted on November 3, 2013 by Wingclipped

On 8 January 1749 The Amsterdam, a cargo ship of the Dutch East India Company, left North Holland on its maiden voyage to the East Indies.  The ship got to Beachy Head in the English Channel where struggled for several days to make any headway in a storm.  Bubonic Plague broke out on board, followed by a mutiny, and then the rudder broke off in the stormy weather, leaving the ship to the mercy of the seas.  I wonder if the captain got that sinking feeling?  He should have, because The Amsterdam beached in the mud off Bulverhythe and began to sink.

In 1969 the wreck of the ship was discovered; parts of the keel were perfectly preserved in the mud.  The wreck of The Amsterdam is today considered to be the most well-preserved East India Company ship ever found.  We walked passed the wreck as we made our way along this section of our Coastal Path, but unfortunately the tide was in and we could see nothing of it.  We had to make do with a photo on an information board.

What, you may wonder, does all this have to do with a trip to Amsterdam?  The answer is this:  at the Nederlands Scheepvaart Museum there is a full-scale replica of the ship.  And if we were in Amsterdam, we were going to see it.  Look!  There she is! 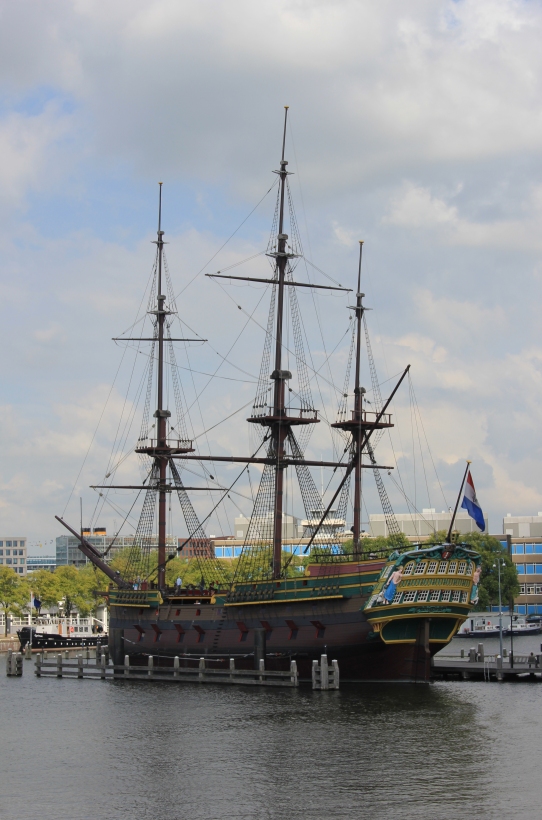 When they built this replica they went to quite a bit of trouble.  There were quite a few knots to tie. 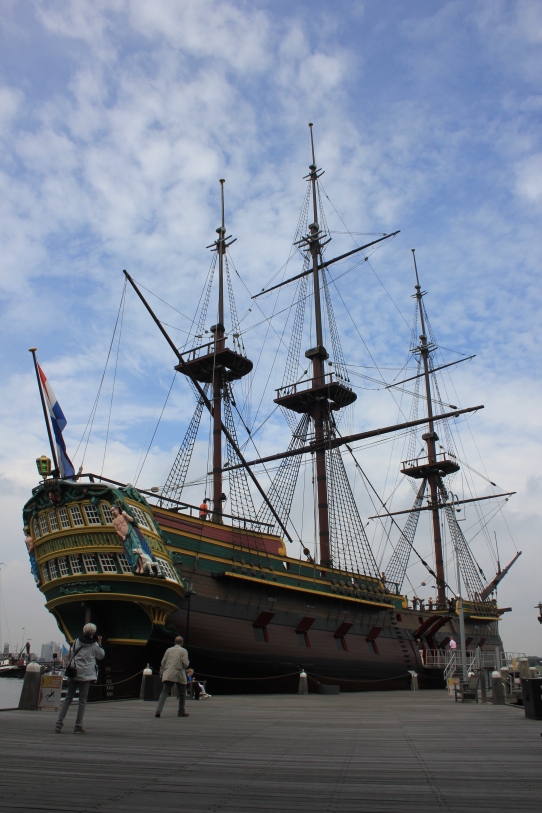 There was some fiddly painting required, too.

You could wander around the whole ship and see where everything was.  Here is the gun deck. 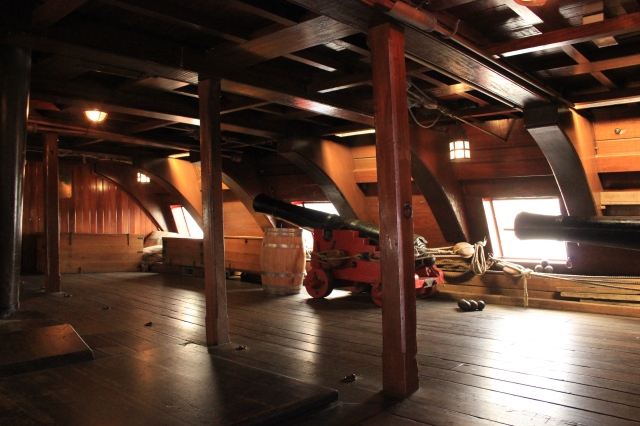 Below decks we got into the cargo hold and right up to the bow, where thousands of tons of water were being held back by the timbers.

We even got to sit in the Captain’s Cabin.  The ceilings were a bit low for our liking, and the place felt a bit too homely.  If I had been captain, the first thing I would have done is change those dreadful curtains.

The Amsterdam replica was an interesting place to visit, but if I am honest it felt rather too new and shiny.  It felt devoid of adventure on the high seas.  “It” had not yet become a “she”.  I wonder, If we took those curtains down, stitched them together and hoisted them up to be a mainsail…  Would we be able to take the veneer off the timbers?  Could we age them with a bit of well-earned sea salt on our way to Beachy Head?  The kids were up for it, but my wife insisted that she rather liked the curtains and that we should leave them where they were.  Thus it is that The Amsterdam still continues to wait patiently for someone to take her helm and steer her to the completion of her maiden voyage.

Points on this part of our Day 3 walk through Amsterdam (copy and paste the co-ordinates into Google Earth):

Walk Statistics (of which this post forms the second part):

5 Responses to The Coastal Path in Amsterdam – The Amsterdam VOC