The Coastal Path in Amsterdam – Rembrandtplein

Rembrandtplein is a square in the centre of Amsterdam named after the artist Rembrandt van Rijn.  Rembrandt is one of the Old Masters and one of the most important and influential Dutch painters.  He had a house just over the other side of the River Amstel, where he lived, taught and worked from 1639-1656.

There is a statue of him in Rembrandtplein, and in front of that statue we saw several others.  These were bronze characters from one of his most famous paintings, “The Night Watch“.  In fact, that is not its true name.  Its formal title is “The Militia Company of Captain Frans Banning Cocq and Lieutenant Willem van Ruytenburch preparing to march out“.  Here they are, readying themselves for their adventures, overlooked by the Old Master himself. 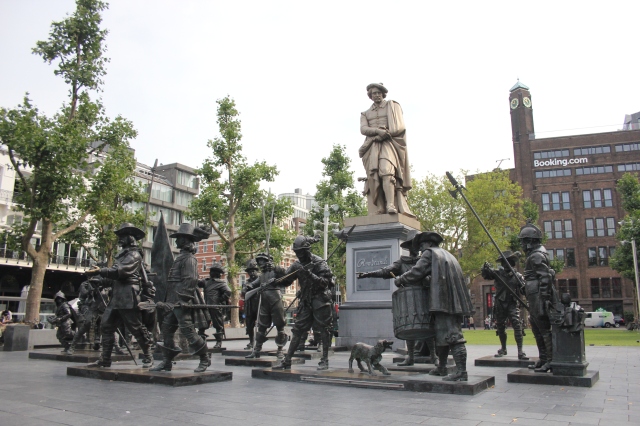 Do they look familiar?  Perhaps not.  But have a look at the original painting, which we saw two days later at the Rijksmuseum: 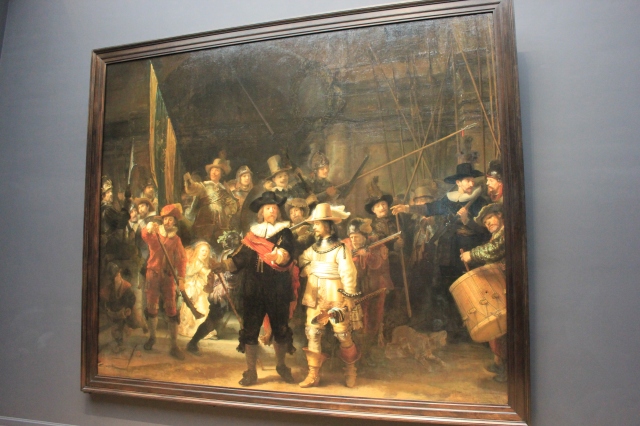 Here they are in a bit more detail.  This, I presume, is Captain Frans Banning Cocq.  See how the statue’s hand gleams where it has been shaken so many times by tourists?

And so this must be Lieutenant Willem van Ruytenburch: 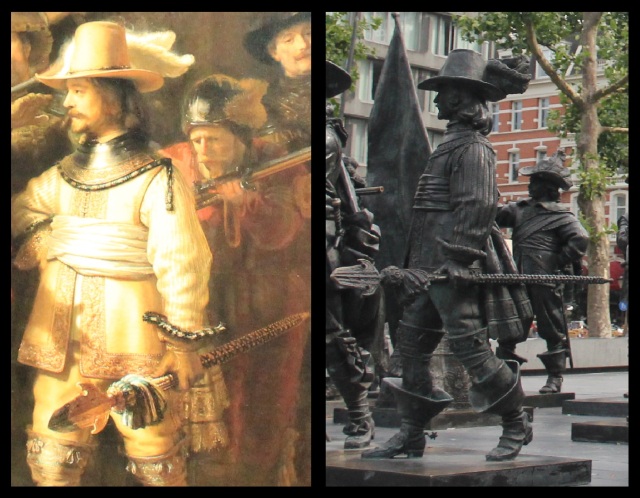 This drummer is nearly cut out of the painting, but the scene in Rembrandtplein puts him firmly back in the action. 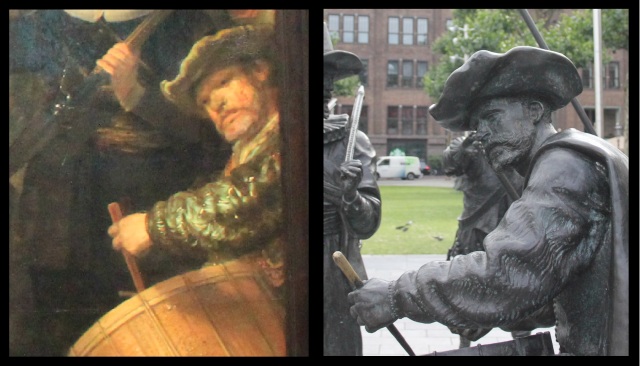 In the painting, this rifleman is partially obscured from view, but as a statue the lucky man gets his right arm back, after more than 350 years of having to do without.  In the painting he is looking intently at his flintlock.  As a statue, however, he is looking quizzically at his new-found arm, wondering where on earth it just materialised from after so many years!

We sat down, watching various tourists have their photos taken with the life-size figures.  One particular Japanese tourist became something of an impromptu comedy hero; to the increasing mirth of us and others, he posed with various figures.  He shook their hands; he planted kisses on their cheeks; he tried to play the drum; he patted their dog; with increasing violence, he impaled himself on various swords and pikes.  Finally, he screwed his face up in abject terror and pushed his temple to the muzzle of a musket.  Oh no!  Did he not realise?  This was the very musket owned by the figure who had just been given his arm back after 350 years of waiting – that trigger finger must be very itchy indeed after all this time!  But of course nothing happened.  The Japanese tourist got all the photos he wanted and left, leaving me to wish that I had also captured his antics so I could post them on this blog…

Points on this part of our Day 2 walk (and paddle) through Amsterdam (copy and paste the co-ordinates into Google Earth):

Walk/Paddle Statistics (of which this post forms the third part):

4 Responses to The Coastal Path in Amsterdam – Rembrandtplein