Posted on October 5, 2013 by Wingclipped

Bracklesham Bay is well known for its fossils; they are literally and liberally littered all over the place.  So we were told, anyway.  As we approached Bracklesham Bay we found a geocache dedicated to the fossils so commonly found around here – this cache even had some samples in it.

As we wandered along the beach we kept a keen eye out, but we saw none.  We did at least find some interesting shells rolling around in the surf, surrounded by a hundred fizzing bubbles.  We collected a fair few of these as we walked.

It was by accident that one of these managed to break; in fact it more crumbled apart.  Should that happen to a shell this thick?  We examined it more closely, and realised that this was no shell at all.  It was made of clay – it was a fossil!

We realised that the hundreds upon hundreds of shells we had passed were not normal shells at all, but fossils.  By the end of our walk along the bay we had handfulls of the things. 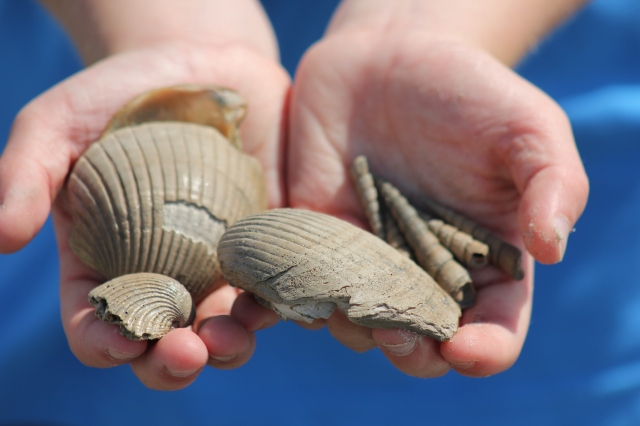 The two largest shells, together with the similar smaller one in the foregoround, are Venericor planicosta, a bivalve which lived buried in the seabed, often in the intertidal zone between low and high tides, or in the shallows.  It would feed on food particles in the water, and was itself food for a variety of animals.

The turreted fossils in the background are turritella, a type of sea snail.

Finally, the fossil almost hidden from view by the others, and of a lighter brown colour, is Cubitostrea elegans, another bivalve and a type of oyster.

Walk #58 Statistics (of which this post forms the fifth part):