It is said that Littlehampton is home to the World’s Longest Wooden Bench.  It runs along the seafront.  We were excited in the extreme when we arrived, as you can tell from this picture of us sitting on it:

Oh!  Are we not looking that excited?  Perhaps this is because we have found out that this is not the World’s Longest Wooden Bench.  That accolade belongs to a long wooden bench in Japan, built in 2011, which stands at 653.02 metres. According to various internet sources of varying reliability, Littlehampton’s bench stands at 324 metres or perhaps 342 metres, which means one of the sites has the “2” and the “4” mixed up.  According to one hopeful website, Littlehampton’s bench stands at 655 metres.  That would give it the crown of the World’s Longest Bench, but Guinness have yet to be persuaded – the figure is clearly wrong.

Suffice to say that whilst Littlehampton’s bench may not be the longest in the world, it is still very long.  It is so long that certain design features have been necessary in order to retain the length of the bench whilst still accommodating local infrastructure:

The council have had to make some difficult decisions when it comes to priorities: 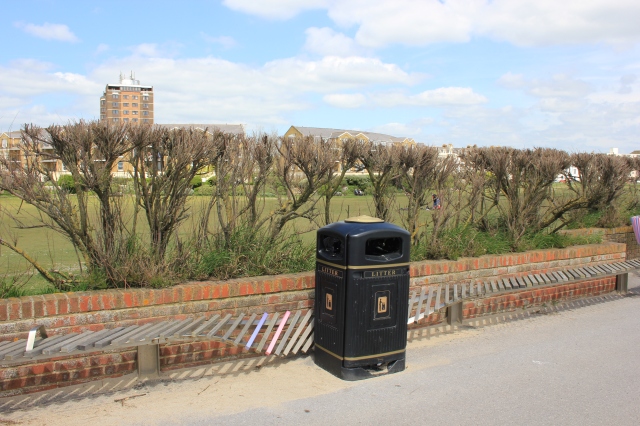 One of the best things about this bench is that it has been incorporated into a work of art in various places.  Wow!  If only I had some Scalextric cars on me! 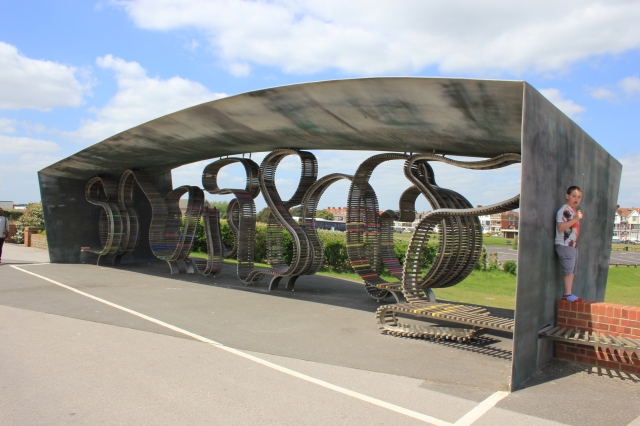 These parts of the bench actually seemed quite comfortable!

Littlehampton’s bench may not be the longest in the world, but it is the longest in Britain.  Each of the 9,000 slats can be sponsored and dedicated to someone.  There is a slat there somewhere dedicated to Anita Roddick, founder of The Body Shop.  She died in 2008, but was born in Littlehampton and opened her first shop in Brighton.  Her husband donated £100,000 towards the £500,000 total cost of construction.

The problem is that the Council are running out of slats.  In 2012 they announced they had plans to extend the bench and so steal the crown of World’s Longest Bench from the Japanese.  How easy that might be in these times of austerity I do not know, but every now and again you need to announce you are going to do something you might never achieve – like walking around the coastline of Britain I suppose…

Walk #55 Statistics (of which this post forms the fifth part):

9 Responses to 55e – Littlehampton Part I