There were lots of fisherman on the western arm of Shoreham Harbour.  Surely, but surely, we would see someone catch a fish here.  The statistics so far were 435 miles walked; 1 fish caught.  This compares to 4 Apache Helicopters, 2 Spitfires, and 2 naked men encountered.  Are you really more likely to see a naked man wandering along than a fish being caught when walking the coast of Britain?  Surely not!

Numbers were on our side.  One of these guys must catch a fish,  Mustn’t they?

We wandered up the harbour arm to see what we could see. 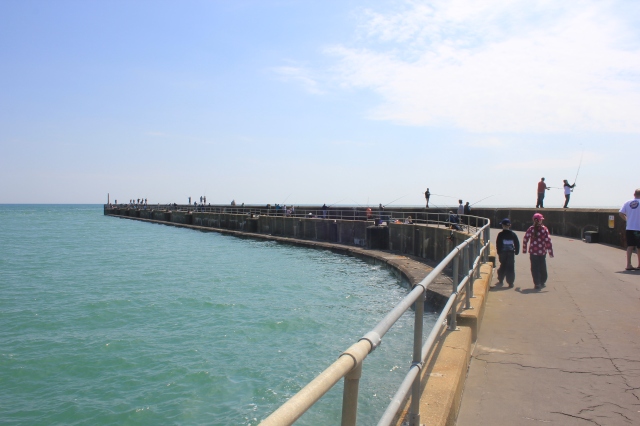 We didn’t have to wait long.  Within 30 seconds someone yelled, “Got one!”.  Other people turned around enviously, rods in hand.

Fish Caught, 2  :  Naked Men Seen, 2.  A draw.  We carried on walking up the arm, hoping someone else might be lucky.  We had a moment of excitement when one person hauled on his rod; it bent against the pressure, but he only managed to reel in some seaweed.  We walked right up to the end of the arm, but nobody met with success.  Oh well, at least the first fish had evened the statistics out a little.

We turned around and began to walk back, and then heard a shout.  The same lad we had seen catch a fish on the way up seemed to be hopping around excitedly and reeling in his line as quickly as he could.  With a flick of his arm he hauled his line up above his head and started to swing it over.  Five fish were dangling from it in five different places.  Five fish in one catch!  This was a full house – you are only allowed five hooks on your line.

He arced the line over the walkway and jumped off the wall to examine his catch.  The fish were slapping around and he was trying to deal with them all at once.

The smallest of the fish he threw back to the sea.  The others, he said, were going to be dinner.  One by one he picked the fish up, took the hooks out, held the fish carefully and then flicked his wrist.  I am not sure exactly what he did, but the fish were quickly dispatched.  The entire episode only took a few seconds.

As he was doing this another shout went up from his father-in-law, who was fishing next to him.  He also swung his rod over, revealing several fish dangling from it.  I think there were three, but didn’t have time to memorise what I had seen, for other shouts started going up along the arm.  Rods were being lifted up, one after the other, in an almost oscillating motion, and being swung over to the harbour arm.  Fish glinted from the lines.  The father-in-law turned to me and grinned.  “It’s a shoal going through,” he said.

It looked as though half of Shoreham was going to be eating mackerel tonight.

We left the harbour arm comforted by the knowledge that fisherman really do catch fish, because quite frankly before today I was beginning to wonder.  As we walked on, I turned round for one last look.  Still they were pulling fish out of the water!

We ended our walk a short while after this, calling a taxi back to the power station where we had parked.  As we arrived back, we noticed something strange going on out at sea.  A helicopter was flying low in the distance, appearing to chase a boat.  What was going on I have no idea.  A training exercise presumably, but it looked very skillful and kept us entertained for five minutes or so.  Then the helicopter turned and flew off, leaving the boat to make a slow turn before it too headed back to shore. 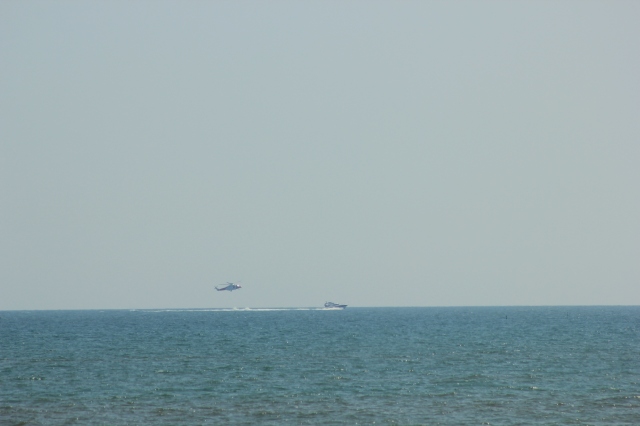 Walk #53 Statistics (of which this post forms the final part):