49 – The Problem with Chalk and Flint

Whilst the rest of the Coastal Clan battled with a virus, I went back down to the south coast to meet Mark, our friend and Guest Walker.  We had been trying to get together to walk over Beachy Head and the Seven Sisters for weeks.  Our diaries finally coincided.  The main Coastal Clan had in fact already completed this stretch, but their being ill presented a good opportunity for me to revisit.

Mark and I parked in Birling Gap and set off.  It was a little bit bracing. 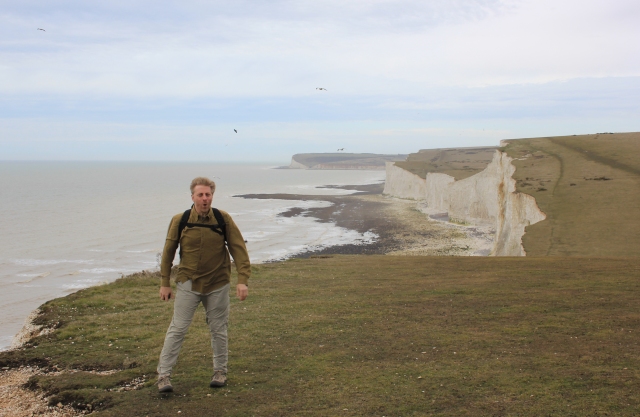 At the end of the Sisters we dropped down into Cuckmere Haven, circling round on ourselves to see the cliffs.  The cliff faces are chiefly noticeable for the fact that they are big and white, but in fact they are worth a closer look.  They took millions of years to form (I have been corrected on this point – see Oomkees’ comment below), but are now at the end of their life.  Soon they will fall into the sea.  Surely, therefore, they are deserving of a few minutes of time.

They have thin dark lines in them, running horizontally across their faces. 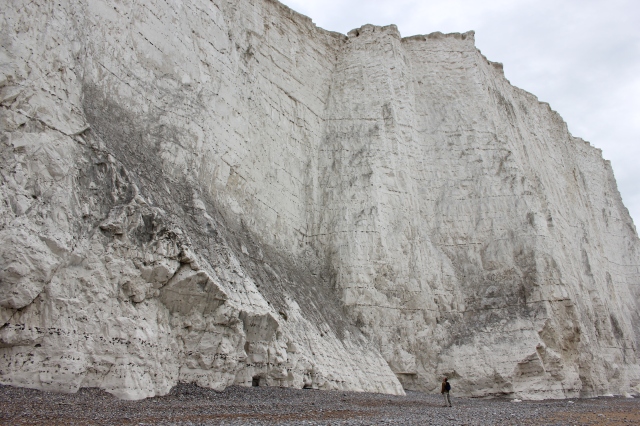 These dark lines are flint.  Whilst the chalk in the cliffs was made from the calcium-rich skeletons of trillions of plankton, called coccoliths, the flint is different.  It is not calcium-rich at all, but formed primarily from silica.  It comes from quite a different source altogether. 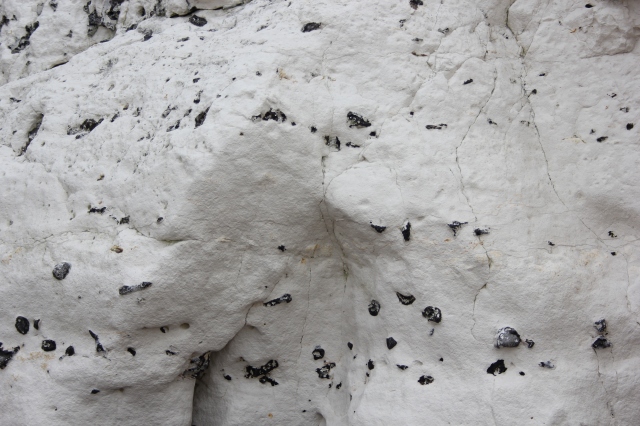 The flint deposits here are believed to have come from marine sponges, as well as from silica-rich plankton called diatoms and radiolarians.  As plankton with calcium-rich skeletons died and literally rained down onto the seabed, forming a white ooze of sediment, they were joined by these marine sponges and silica-rich material.  The silica then formed into pockets of ooze within the ooze, eventually dehydrating and hardening into quartz crystals that form the flint. 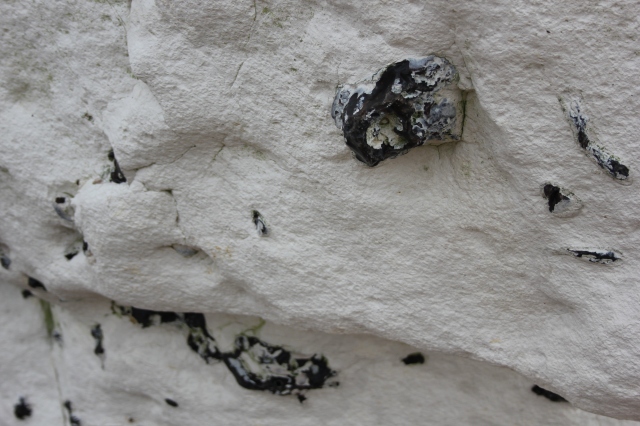 The question, though, is why the silica concentrated in the way it did, forming flint “nodules”.  The answer to that question is that nobody really knows.  What is known is that the formation occurs during diagenesis, the name given to the process during which rock forms from sediment.  During diagenesis the silica is mobile enough to concentrate.  Perhaps is concentrates in a burrow in the ooze, made by a another animal.  Nobody knows for sure.

The chalk and flint was formed here during the Late Cretaceous Period, 60-90 million years ago.  How many years, therefore, might have passed between each flint band in this chalk?

These bands are known as “flint horizons”.  If the flint was formed by silica concentrating around burrows, then this would suggest that there was a pause in chalk deposition, because for an animal to burrow into the ground, and indeed leave a burrow in tact,  some form of earthy base must have formed.  Then, later, the silica would have had time to penetrate the burrows and concentrate enough to form the flint.

This is not the only theory.  One alternative theory (by way of illustration) is that the Milankovitch Cycle is to blame.  Milankovitch Theory deals with the oscillating changes in the orbital cycle of the Earth (stick with me here).  It is measured in thousands of years, and affects climatic patterns.  Every 20,000 years, for example, the rotational axis of the Earth changes. Would that, then, account for a change in the way sediment settles and allow flint horizons to form?  One problem with this is that Milankovitch Cycles are driven by changes to the Earth’s ice volume, and during the Cretaceous Period there were no ice caps at either pole.

So what could it be?  Were there pauses in the precipitation of calcium-rich coccoliths to allow siliceous planktonic micro-organisms to concentrate during diagenesis?  Or did Milankovitch oscillations in axial tilt determine climatic changes by orbital forcing, thereby causing layers in the upper-chalk formations of the Late Cretaceous Period?

The best thing, I find, is to have a whisky and look at the pretty patterns in the cliffs.

4 Responses to 49 – The Problem with Chalk and Flint