The Coastal Path in Paris – The Eiffel Tower

“What?  You’ve never been to Paris?” asked our incredulous friends.  We were tired of hearing this.  There was only one thing for it – a Eurostar booking later and we were on our way.  I suppose it is only natural that during our first trip we were out-and-out tourists, visiting only picture-postcard places.  First stop was the Eiffel Tower.  It dominates the Paris skyline from pretty much everywhere.  It is an iconic symbol, instantaneously recognised all around the world.  Yet although we had seen it on screen and paper a thousand times, the real thing still held a certain amazement. 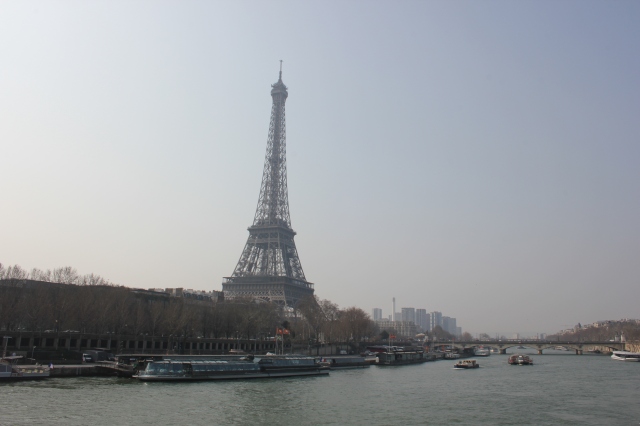 We arrived in the afternoon, dumped our bags at the hotel and walked straight there.  We stood underneath and marvelled at its sheer structural scale. 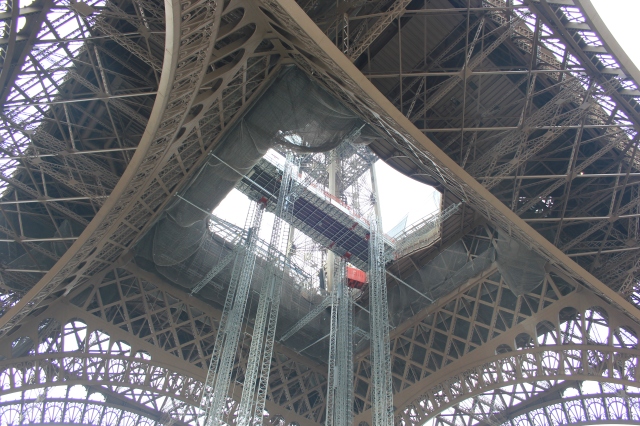 We queued up for about 45 minutes, buying our tickets to walk up to the second level.  From here it is possible to get a lift up to the very top, but we were told there was a further 45 minute wait.  It was already late in the day and we decided against it.  As we walked up we realised just how much metal has gone into the Tower’s construction. 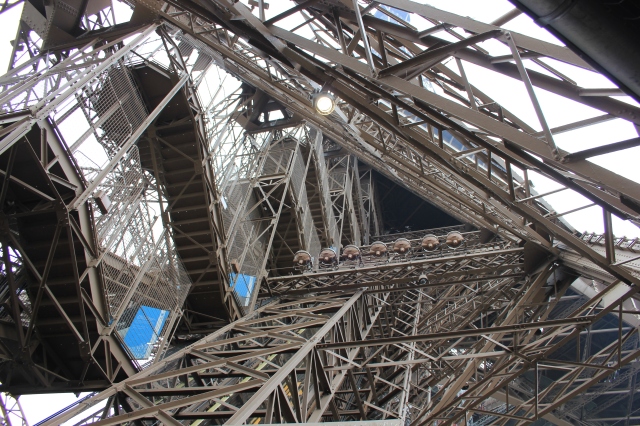 As we climbed the steps, metal lifts whirred up and down metal rails, pulled by metal cables which were powered by metal wheels.  Metal spotlights watched the proceedings. 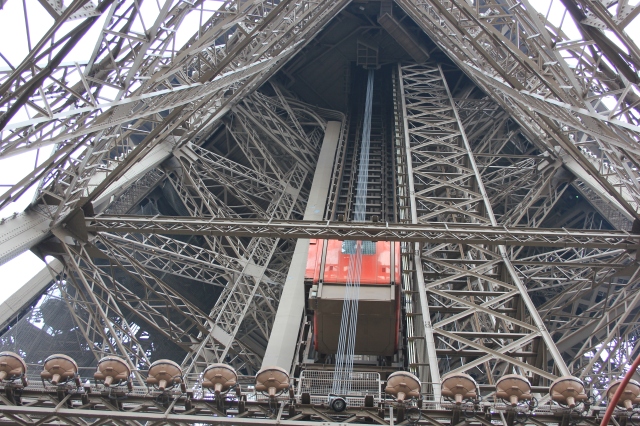 Lift after lift went up and down. 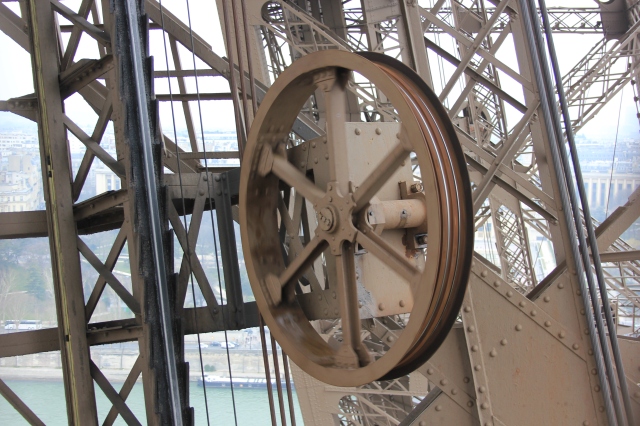 We got up to the second level.  Despite the haze, there were impressive views from all sides.

The Champ de Mars to the southeast… 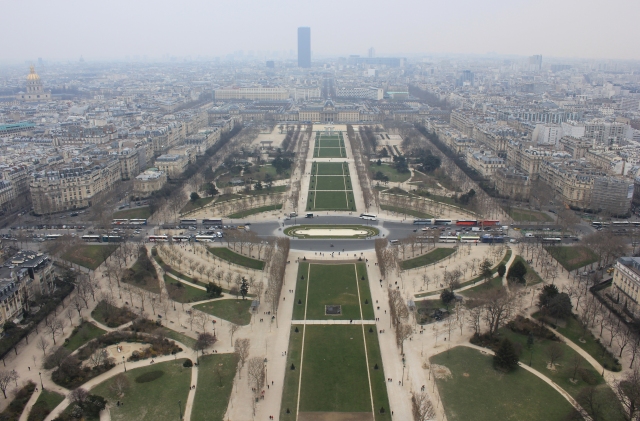 To our north the Arc de Triomphe stood fighting for breath against the smog. 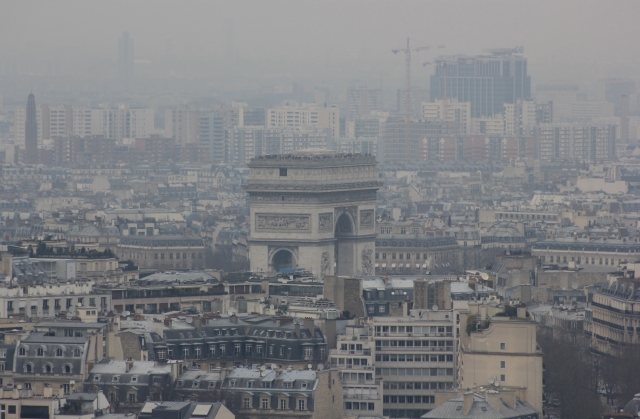 At the second level the wait was not, in fact, anything like 45 minutes.  It was more like five to ten.  We wondered if there was anywhere to buy tickets to get to the top, but there was not.  What had once been a ticket office was boarded up.  We could either go back down and queue up again, or accept that on this trip we would not reach the top.  We accepted it was not to be.  All we could do was look up to the pinnacle and wonder what its views would be like.

We went back down and straight into a bistro we had seen earlier.  After a very good meal served by a very friendly waiter, we left.  Night had fallen.  The Eiffel Tower was lit up, with a revolving light shining piercing beams from the very top. 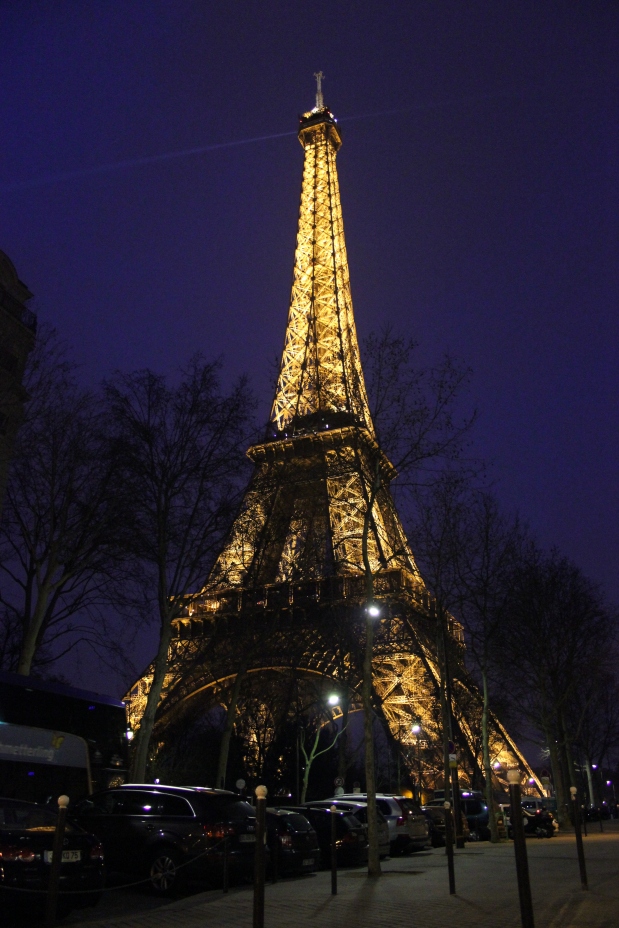 It just so happened that we left the bistro a few minutes before 8 o’clock.  We did not realise it, but we were in for a treat.  Precisely on the hour we heard some excited cheering coming from the balcony of a nearby building.  We turned, and there was the Eiffel Tower, covered in a shower of twinkling white lights.  What a spectacular display!  Apparently this only lasts a few minutes each hour, but it is truly worth positioning yourself for the occasion.  We went back to the hotel very happy with our first day of Parisian tourism.

This entry was posted in France and tagged Eiffel Tower, paris, travel. Bookmark the permalink.

1 Response to The Coastal Path in Paris – The Eiffel Tower