Our walk today started back at Eastbourne Pier.  Although we had visited the pier at the end of our last walk, we decided to wander up to its head again to get a view of today’s coastal path.  The  white cliffs of Eastbourne Downland stood invitingly in the distance.

Before we could reach the cliffs, we had the rest of Eastbourne to enjoy.  Our first stop was the RNLI Eastbourne Museum, housed in the William Terriss Memorial Boathouse. 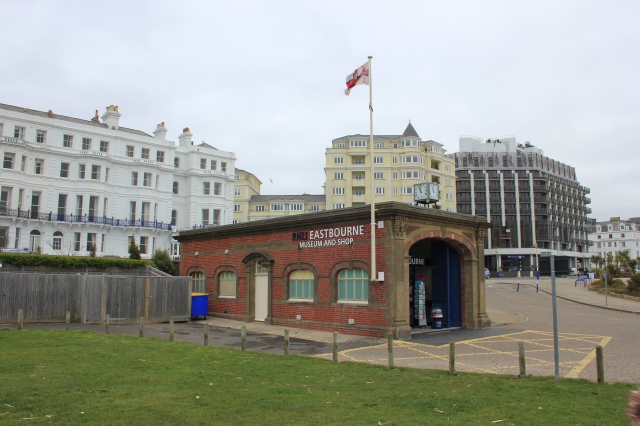 Terriss was a popular 19th Century actor, who was also well known for his generosity and capacity for helping others.  One night, he arrived wet through at a theatre where he was performing.  He said nothing but got on with the show.  It was only later that his puzzled co-actors found out why he had arrived dripping wet: on the way to the theatre he had jumped into the Thames to rescue a drowning child.

His charity extended to others in his trade, including a man named Richard Archer Prince.  Prince was a struggling actor trying to make the big time.  Terriss lent him money and also secured him bit parts in his shows.  However, “Mad Archer” was known as a heavy drinker with an unstable personality.  He resented, with obsessiveness, the fact that Terriss always received top billing.

On 16 December 1897, Terriss arrived at the Adelphi Theatre for a show.  As he got to the stage entrance, Prince, who had been lying in wait, pounced out of the shadows.  Terriss was stabbed several times.  As he lay dying, Prince waited calmly for the police.  As he was led away, he reportedly said that Terriss “…knew what to expect from me…“.

Prince went on trial in front of a shocked Victorian society, claiming Terriss had prevented him from advancing his career.  He was found guilty of murder, but escaped hanging as he was found not to be of sound mind.  He spent his remaining days in the Broadmoor Criminal Lunatic Asylum.  There, it is said, he would write and produce plays in which he was always the lead role.

The Daily Telegraph organised a campaign to collect public donations in memory of Terriss.  These were used to build the RNLI Lifeboat House at Eastbourne, which is now a museum.

Auntie Jenny (our Almost Full-Time Coastal Path Guest Walker) seemed a bit dubious about this story.  “Oh yeah?” she said, “That sounds like a story THIS BIG!!“

“THAT big?” stammered my wife, dumbfounded, her hands hanging limp beside her in astonishment.

Either that, or Auntie Jenny decided to move some invisible freight from one side of the promenade to the other.  It was, after all, in her way.  But you would have thought my wife would have given her a hand rather than just standing there…

Anyway, the William Terriss tragedy is all true.  Auntie Jenny, do you see that plaque on the building right behind you? 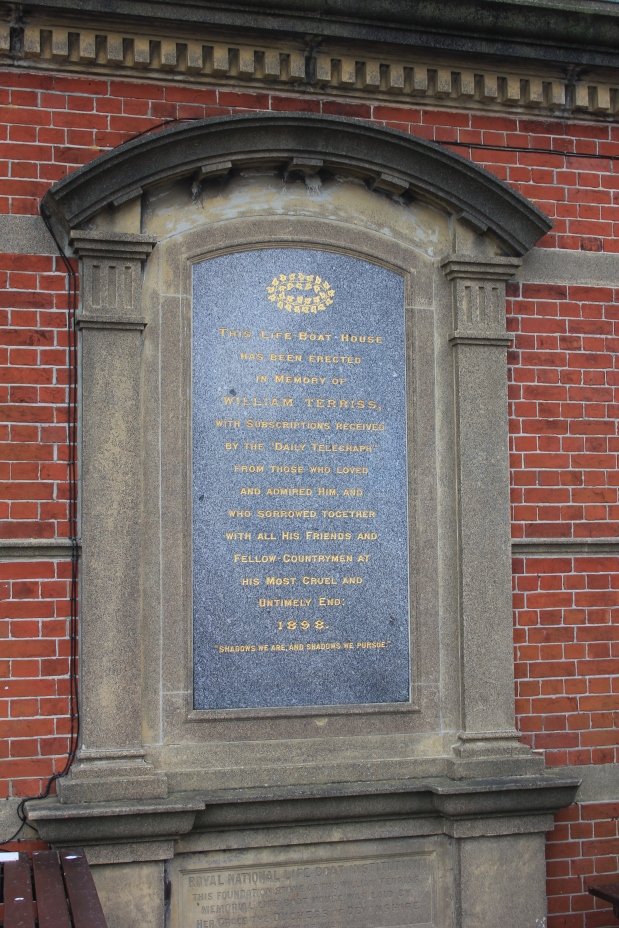 Terriss was immensely popular.  Some 50,000 people attended his funeral in London.  His ghost is said to haunt Covent Garden London Underground station.  But why it was a lifeboat house, in Eastbourne in particular, that was erected in his honour I simply do not know.

Walk #47 Statistics (of which this post forms the first part):

4 Responses to 47a – Eastbourne Part I