St Leonard’s was originally developed as a purpose-built seaside resort in the 1820’s.  The idea was James Burton’s, a developer most well-known for his work around Regent’s Park in London.  His idea was to develop a “Regent’s Park by the sea”.  To a certain extent he succeeded, and for a time St Leonard’s was a popular tourist destination.  Indeed, there are still some extremely pleasant parts to it.

But St Leonard’s today is not quite what it was.  The best illustration of this is Marine Court, a truly appalling example of a building which could look beautiful but does not.

When it was built in the 1930’s it was the UK’s highest block of flats.  It was designed to resemble a ship, and to my mind achieved this quite successfully.  It sits at a bit of an angle when viewed from the east.  This looks a bit incongruous in some respects, but which also assists with sightlines, showing off its design from a distance. 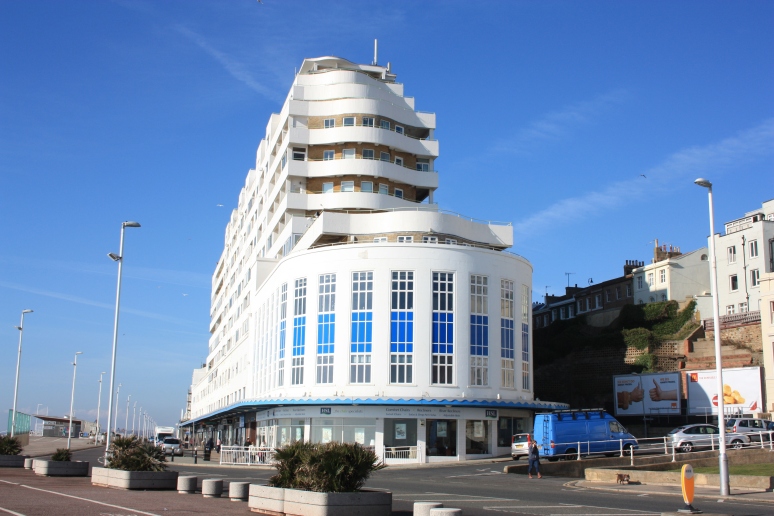 It looks quite impressive, don’t you think?  Well, you are seeing it presented from its best side.  Wander around to the side facing the sea and the external decorations are shameful.

What happened?  According to one newspaper article I read, it all just got a bit much.  Managing agents declared the building bankrupt; services collapsed.  The lessees eventually exercised their right to acquire their own freehold, but clearly there are still problems with managing the building and funding the services.  I imagine the present owners/managers have a difficult task to grapple with, but something has to be done.  The building was designed as a magnificent white ocean liner, but looks more like a giant white elephant.  It brings the whole area down, which is a pity because many of the adjoining buildings are well-kept.  Compare the peeling paint of Marine Court with the Royal Victoria Hotel a few doors down:

Oh dear.  I have presented rather a damning report about a place that actually has some beautiful parts to it, all due to one building.  St Leonard’s was designed to be beautiful, and in fact parts of it still are.  It is just that Marine Court does not happen to be one of those parts.

Some, perhaps, may think that Marine Court would be better off demolished.  Once upon a time it had its chance:

On the night of Saturday July 29th 1944, the ballroom of Marine Court was packed with British and Canadian service men and women, enjoying an evening of dancing.  At the same time a V1 flying bomb was heading towards Britain, but it was hit while still over the sea.  It struggled on for three miles, turned, and was heading straight for Marine Court and its revellers.  It suddenly turned again, and instead of hitting Marine Court it exploded in front of the doors of the nearby St Leonard’s Parish Church, making a 16-foot crater.  The explosion brought down the tower.  On the following morning church members arrived for the morning service to find their church destroyed.

It was rebuilt, and the tomb of James Burton, the man who created St Leonard’s, can still be found in the graveyard today.

Had Marine Court been hit, there would have been appalling loss of life.  Perhaps, therefore, it is good to see it still standing, even in its current dilapidated condition.  The problem to my mind is that it deserves even more than that.  A lick of paint would be nice…

Walk #45 Statistics (of which this post forms the fourth part):