Posted on February 7, 2013 by Wingclipped

The Nuclear Power Station at Dungeness is  in fact two nuclear power stations.  They are known as Dungeness A and Dungeness B.

Dungeness A started generating power in 1965, and stopped in 2006.  It is now being decommissioned, which is a long process.  The defueling has already taken place, but the reactor cooling is not due to commence until 2027.  Final site clearance will not take place until 2087-2097.  By 2087-2097 I will also be decommissioned (and I suspect my final site clearance will have already taken place).

Dungeness B started generating in 1983, and is itself due to be decommissioned in 2018 (I hope still to be in commission at that time).

There are signs up around the power station, explaining what to do if a nuclear emergency should occur, although the signs don’t call them nuclear emergencies.  They call them “events”.  If an “event” should occur then the instructions are to “leave the area“.  If anyone is concerned, they should “seek medical advice“. These types of signs always give me cause for extreme bemusement coupled with a certain despair for the future of the human race.  It strikes me that if someone possesses the intelligence to read signs like these then it is highly unlikely, in the event of an “event”, that they would stick around to bother reading them in the first place.

Having said that, I think I would be tempted to stay and watch the pretty mushroom cloud. After all, why bother trying to get away?  So I suppose the logical conclusion is that signs like these are written exactly for people like me.  Which on my own theory means I must be of low intelligence.  Good grief – my wife was right all along…

In any event, there were no clouds today – at least none of the mushroom variety.  We followed the path that runs along the southern boundary of the power station.  Our view of the shore was obscured by a high shingle bank.  At one point I climbed it, but there is no path running along the top.  It is easier to walk along the path at the bottom than to trudge through the shingle, so I went back down.

Beyond the power station is a further expanse of barren shingle, and beyond that the Lydd Ranges.  The Ranges, operated by the Ministry of Defence, have a public right of way running alongside the coastline for most, but not all, of their length.  As a result, it is impossible to pass through them.  There is no other option but to walk around them.  Thus, our walk along the power station and beyond was always going to be a one-way affair.  We were rewarded with a view of pylons, stood like silent sentinels, carrying electricity off into the far distance.  Beautiful?  No.  Yet there are times when industry holds a certain appeal, and this was one of them.  I stood looking at them for a long time. 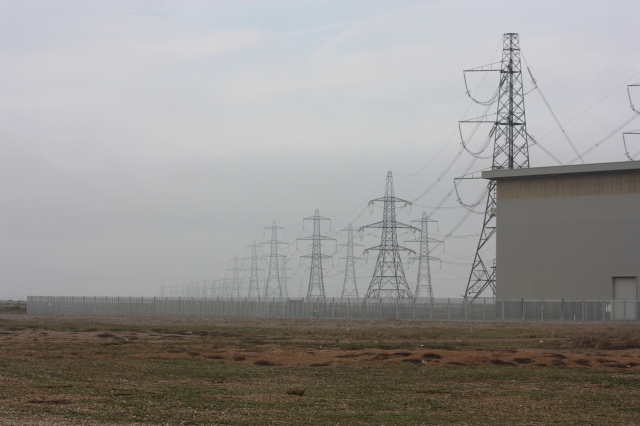 We turned around, and walked back to Dungeness Point, to start our trek inland around the power station and the ranges.

Walk #41 Statistics (of which this post forms the second part):