The way out of Folkestone is via a long promenade of what seems like never-ending straightness.  A promenade was first constructed in Folkestone to support the Victorian holiday trade.  A pier was opened in 1888, along with one of the earliest rollercoasters, The Switchback.  Even Henry Asquith, the Prime Minister, rode The Switchback.  Over the years there have been various seaside attractions.  All have come and gone; the endless promenade remains.

We found the walk pleasant enough, though monotonous.  The good people of Folkestone had done their best to brighten the place up and add points of interest:

They had even turned their hands to urban knitting.

The promenade took us through Sandgate, situated between Folkestone and Hythe.  The most notable feature here is Sandgate Castle, sat right on the shoreline.  With so many Martello Towers lining this stretch of the coast, you would be forgiven for thinking Sandgate Castle was one of them (I forgave myself for thinking this, at least).  In fact it is a Device Fort, built by Henry VIII in 1539-40.  During its history it was visited by Henry himself, as well as Elizabeth I, and Victoria and Albert.  Although it was not troubled by any aggressive invasion from foreign powers, it did suffer from aggressive invasion of the sea.  Erosion took its toll, and the Great Storm of 1950 cost the castle about a third of its front section.  Coastal defences have now been added to protect it from further damage. 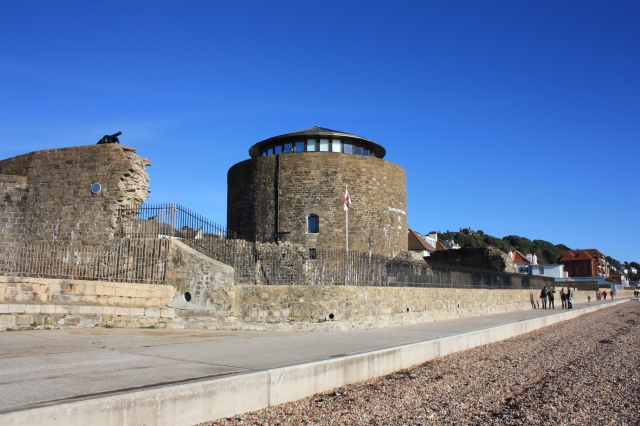 Just beyond Sandgate Castle we found a memorial to General Sir John Moore, a controversial figure due his role in the Napoleonic Wars and the Battle of Corunna in 1809.  Moore was in Spain, supporting the Spanish armies who were opposing Napoleon.  However, at Valladolid in northwestern Spain he learned that the Spanish had suffered several defeats, so decided upon a tactical retreat.  He also learned that the French under Marshall Soult were close by and unaware of the British position.  Thus, before retreating, he decided to attack Soult with the element of surprise.  His attack was a success, but he failed to follow up.  The French seized their chance, massing their troops with the intention of destroying what was Britain’s only field army.  Moore now had no option but to retreat as quickly as he could.  This meant an arduous 250-mile journey northwest through the Spanish mountains in freezing winter weather.  Discipline broke down.  Equipment was abandoned.  Soldiers looted, got drunk, and stragglers were left for the French.  The French spared them no mercy, but cut the stragglers down.  Rearguard actions by the British held off the ever-closing French pursuers.  But on arrival at the coastal town of Corunna, from where Moore planned to evacuate, the transport ships were nowhere to be seen.

It took four days for the transport ships to arrive.  The French arrived at the same time, fatigued from the chase whilst the British had at least had a chance to rest.  As the British army started its evacuation, Moore formed up his men and held the French army at bay in fierce fighting.  That night, most of the remaining British forces slipped away from the battle lines in a tactical retreat and boarded the ships.  The next day the French attacked the ships with artillery, but the British army had been saved.

The Battle of Corunna itself was classed as a win for the British, who managed to complete their evacuation, but the fact was the French had driven them out of Spain.  As for Moore himself, he was struck by a cannonball during the first day of the battle and thrown from his horse.  A round-shot had torn a hole so deep in his left shoulder that his lung was exposed; the ribs over his heart and part of his collar-bone had been smashed; and his arm was torn to the point of hanging only by the sleeve of his coat and a shred of flesh.  He lived long enough to see victory assured.  His last words were, “I hope the people of England will be satisfied.  I hope my country will do me justice”.

In fact, his country was deeply divided.  Some saw his retreat as an epic journey, saving the British army from annihilation.  Others, including some of his officers, saw him as “lamentably deficient”, extricating his army from a position of which his own decisions had placed it.

Moore is celebrated in Sandgate because he used to command the training camp at Shorncliffe, just to the north of the town.  Whilst at Shorncliffe he had an excellent reputation.  It was he who established the training regime that would produce Britain’s first permanent light infantry regiments.

We left Sandgate via the never ending promenade.  It stretched away towards Hythe.  Further along the coast the shoreline turned south.  We could make out Dungeness Power Station on the horizon, together with at least one of its lighthouses.  The winter sun bathed the seascape in a warm richness.  We ate some lunch and walked on.

Walk #38 Statistics (the entire walk from Folkestone to Hythe, of which this post forms the third part):

2 Responses to 38c – Folkestone to Sandgate