Posted on December 4, 2012 by Wingclipped

We arrived back at Folkestone on one of those sunny winter mornings where even the smallest detail in the distance can be seen in sharp clarity.  We parked at the top of the cliff overlooking the beach.  The tide was out and early morning walkers were strolling across the sands.

Looking back to the east, we saw the boulder field we had crossed the week before.  This brought back memories of the tedious clamber we had faced at the end of our previous walk.  The abrupt end of the rocks, giving way to the untouched sand, was appealing – all the more appealing because we knew we would be walking away from it today! 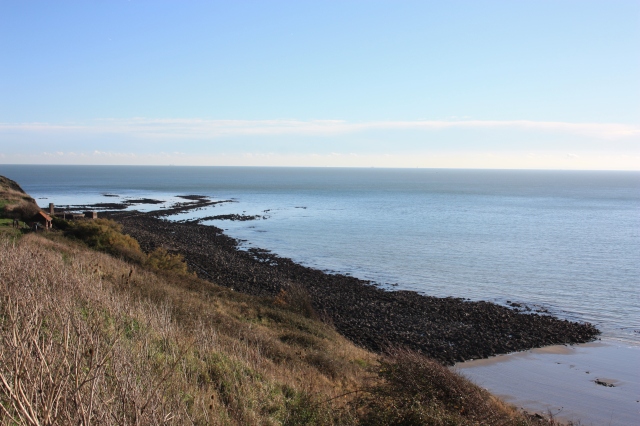 Ahead of us, out to sea, was the harbour pier, and Folkestone Harbour Lighthouse.  As I looked, I could see people walking up to the lighthouse and back.  Good.  We could wander up to the end.

To get to the harbour arm we had to walk the harbour area itself.  The harbour was enclosed by high walls.  Boats listed uselessly on the wet sand, waiting for the tide to come back in.

Once round the harbour, we headed for the entrance to the Harbour Pier, but couldn’t find it.  We walked by various harbour buildings and beyond a cafe with a couple of tables in an outside seating area.  Men in hi-viz jackets watched us as they ate their breakfasts and smoked.  We found the wall of the pier structure itself and tried to find a way in, but there was none.  At one point we found a sign telling us that access to the pier was through a doorway, but this doorway only led to a disused railway track.  Eventually, we went back to the cafe and asked a couple of men for directions.  They pointed us through the door we had already been through.  We should have been more bold in our exploration; at the far end of the disused railway platform was a set of dirty steps leading to a rusty door in a rusty doorway, and then to the pier itself.

This disused railway platform used to be Folkestone Harbour Railway Station, a major port for crossing the Channel to France.  However, when the Channel Tunnel opened in 1994 Folkestone could not compete.  Most of the major ferry companies moved away.  The Orient Express continued to use the station until 2001, as did a few special charter trains, but these were few and far between.  In 2009 its closure was announced.  Today, it seems to be settling into dereliction quite comfortably.

On the disused train tracks stood a sculpture.  We studied this for a while.  Why would anyone leave a piece of artwork on an abandoned railway?  It was of five people, huddled together, with downcast looks on their faces.  The sculpture itself sat on a rug.  Was this rug there to protect the artwork?  Surely not; it had been left open to the elements, and was now stained, soggy and bedraggled.  But for the same reason, therefore, surely it could not be part of the artwork itself. 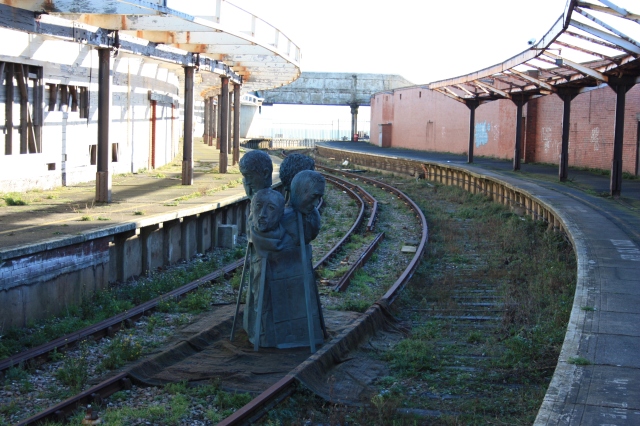 A small plaque, easy to miss, was fixed to one of the metal posts on the platform.  The title of the piece was “Rug People” by a German artist called Paloma Varga Weisz.

“Carrying a group of five strange visitors, a carpet appears to have landed on the tracks, as if out of some unknown fairytale or mirage.  The work is inspired by the history of the now abandoned station, the refugee camps in Calais, and Varga Weisz’s father’s fate of emigration“.

I have no idea what happened to the artist’s father, but as I began to think about these words, I came to realise that the sculpture had probably been placed here with a point in mind.  It had been dumped in the middle of a derelict train station, right in the middle of the tracks, on top of a soggy bit of carpet, and left to fend for itself.  No wonder its faces looked so mournful.  You could walk along the platform and view the five faces from an elevated distance, but you couldn’t really get close to them.  Not without getting down onto the tracks.  Was that the “fate of emigration”, to be left in some pocket of dereliction with a bit of damp carpet for protection?  To be observed but not touched by the country you had come to?

We walked on, climbing the dirty stairs, exiting the rusty door in its rusty frame, and went out into the sunshine on the Harbour Pier.

Walk #38 Statistics (the entire walk from Folkestone to Hythe, of which this post forms the first part):