I love the still, crisp, clear days that the onset of winter can bring.  Today, the sun reflected off the peaceful waters of Dover harbour, and we began our walk out of the town. 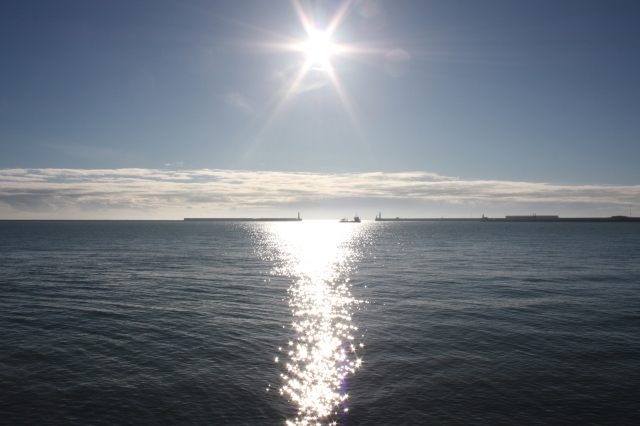 We walked along Marine Parade, a promenade of well kept white-fronted buildings which gleamed at us in the morning sun.  Mike, one of our guest walkers for today, experimented with his new iPhone app and took some panoramic photos.

Stood on a hill, overlooking the town, was Dover Castle.  It was King Henry II who started building a castle here in the 1180’s, but even before that the hilltop position was of strategic importance.  There have been forts on this site since the Iron Age. 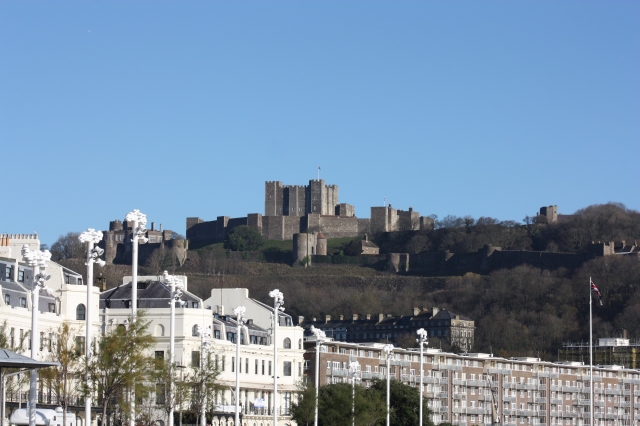 Once built, the castle was garrisoned uninterruptedly until 1958.  It has a network of wartime tunnels running underneath it.  “Did you know,” said Mike, “that Hitler ordered Dover Castle not to be bombed during the War, because he wanted it for his headquarters if he successfully invaded Britain?”.  No, I didn’t know that.  It is true that the bombs fell in and around Dover, but not on the castle.  Food for thought, because the day of our walk was 11 November, Remembrance Sunday.

As we walked along the front, the Spirit of Burgundy made its way out to sea, as another ferry in the distance made its approach.

At the far west of the harbour are the Dover marinas (there are two of them).  These are tucked in to one corner, small and compact.  The main harbour seems to contain an entire ocean within the embrace of its arms; massive ferries move slowly and silently over it.  The marinas, by comparison seem faster and busier, the activity like watching ants scurry over their nest.

Once beyond the marinas, we had to cut inland and walk along the main dual carriageway through the town.  After a short distance we took a road bridge over to Lord Warden Square, around which various harbour buildings and car parks are arranged.  We walked through one of the car parks to Dover Beach.  This is shingle at its eastern end, but gradually gives way to sand.  White cliffs block the way west, although at low tide a scramble over some rocks allows a passage through.  The kids played in the surf as we walked. 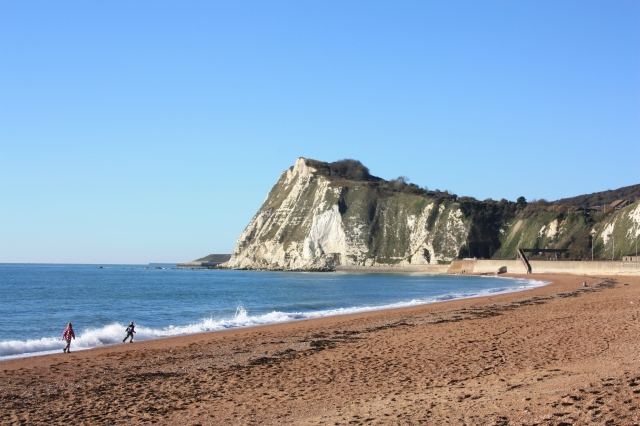 For us, the tide was in.  We could not walk under the cliffs.  We had to take a footbridge over a railway line and then walk over the cliff itself.  As we climbed the slope, we checked our watches.  At 11 o’clock there would be Remembrance Sunday’s two minutes’ silence.  At two minutes to eleven we reached an isolated rest area half way up the cliff.  We took off our packs.  I looked around.  The view west was up and over the cliff.  East was back towards Dover, where the whole of the harbour was in view.  Dover Castle could still be seen guarding the town.  To the north was the rolling countryside; to the south open sea.  At 11 o’clock distant sirens sounded from Dover harbour, while a cannon was fired from somewhere to the north or west.  Everything stopped.

The skies above us were where the Battle of Britain had been fought just over 70 years ago; the white cliff upon which we stood a symbol of what was at stake.  It was a poignant place to be whilst observing silence for those who had lost their lives.  I thought particularly, on this occasion, of those who had been killed directly above where we were now standing.

Walk #37 Statistics (the entire walk from Dover to Folkestone, of which this post forms the first part):

2 Responses to 37a – Leaving Dover