We left Shell Grotto and walked back to the harbour.  On the way, we stopped off at Outside the Square gallery.

If you are in Margate, Outside the Square is well worth a visit.  It is in Duke Street, in the Old Town.  It is a friendly place, with some stunning works of art.  Last time we were there I almost bought a picture until I realised I had misread the price tag.  I only realised this once the manager had become rather excited about the prospect of selling the picture.  With acute embarrassment, I tried to extricate myself from the predicament as carefully as I could.  The manager was very understanding which was good of him, but it did nothing to reduce my embarrassment.  Still, I had to endure it – £12,000 was not a figure I readily had to hand.

In the meantime, my daughter had been studying a painting of a nude intensely and asked loudly, and with genuine puzzlement, why someone had wanted to paint someone else’s bottom.  When I looked at the painting I immediately had the answer.  Even my wife thought it was a lovely looking bottom.

Today, the painting we liked so much was still there (that bottom really was voluptuous – no, no, I mean the other painting of course).  The gallery owner said hello and chatted to us for a short while. 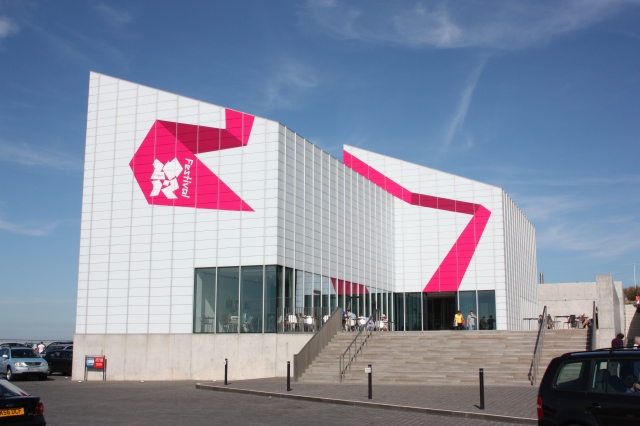 The Turner Contemporary sits next to Margate’s Harbour Arm, a large breakwater big enough to act as a car park for the sea front.  The harbour arm was partly constructed from stone that came from the demolished St Mary’s Church in Reculver.

At the end of the arm is Margate’s lighthouse.  Margate has had three lighthouses in its history.  The second one, built in 1828, was destroyed in the Great Storm of 1953.  The current lighthouse was built the following year.  It stands at 58 feet high and its light is visible for three miles.

We wandered up and down the harbour arm, then turned east and set off along the sea wall.  After a short walk of only a mile, we had drifted out of Margate and into the suburb of Cliftonville, a popular seaside resort in its own right.

We ended our walk at Cliftonville’s bathing pool.  This is an impressively large expanse of water enclosed by a low wall which is breached at every high tide.  I took a staircase up to the cliff top, to try to get a photo.  Even then, the pool was so big that my wide angle lens could not cope with its width.

We had brought our beach towels with us on this walk.  As the others paddled, swam, or in my wife’s case dropped their mobile phone in the sea, I walked back towards Margate in search of a mobile signal so I could call for a taxi to take us back to our car.

Walk #32 Statistics (the entire walk from Birchington, through Margate and into Cliftonville, of which this post forms one small part):

1 Response to 32c – Margate to Cliftonville