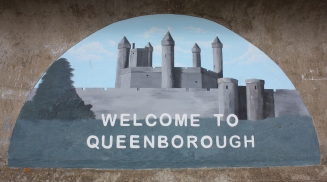 First impressions do not last on the Isle of Sheppey.  Last week we arrived on the island by walking into Rushenden.  Rushenden is not nice.  “You noticed then”, remarked this week’s taxi driver.  Given our experience of Rushenden I had written off the rest of the island as a rather bleak place to visit.  After all, it is dominated by a car park and several caravan parks.  I was wrong.  As we found out on this walk, the north and northeastern stretches of the Sheppey coastline are both beautiful and interesting. 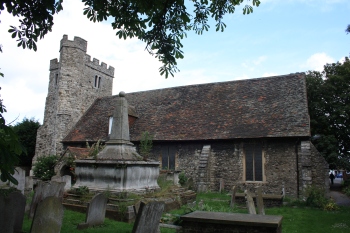 Our walk this week started back in Queenborough, at the western end of the island.  Dating back to medieval times, the town was named by Edward III after his Queen, Philippa of Hainault.  He built a castle here in 1361-1377, and at the same time ordered the construction of the town to support it.  Little of the castle remains today.  Indeed, the only building from medieval times which still stands is the church. 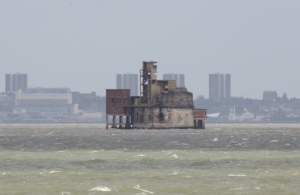 Queenborough has an all-tides jetty, and moored just off the town is the ex-Radio Caroline pirate ship.  There are views across to Deadman’s Island, where French prisoners of war were buried during the Napoleonic era, and also to Grain Tower which we enjoyed so much several weeks before.  The path leads out of Queenborough to Lappel Bank, an area of reclaimed land which is used as a mammoth car park for imported cars.  I have tried to find out how many spaces there are, but there is no information I can find.  Suffice to say it is huge, stretching to over a mile long by a quarter of a mile wide.  It is worth looking at it from above in Google Earth, where it looks more impressive than it seems walking alongside it.  The path is bounded by a 10 foot high palisade fence on one side and a 10 foot sea wall of the other, and continues along its eastern edge for over a mile. 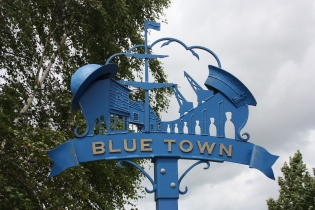 Once out of Lappel Bank we headed in to the Bluetown area of Sheerness.  A rather desolate place, the only real sign of life I noted was a licenced sex shop.  Was this the reason Bluetown is called Bluetown, I wondered?  Well, no.  In the first half of the 18th Century a dry dock was built at Sheerness, and the dockyard workers painted their timber cabins with the same grey-blue paint used for the ships.  By the end of he century there were some 130 blue houses, and indeed, the area was known as “the Blue Houses” at that time.  In 1802, however, the workmen were ejected from their lodgings and moved into barracks.  The name “Blue Houses” dropped from use and the area became known as Bluetown.

Walking through the area today is a bit strange to say the least.  Most buildings appear unoccupied, and the area presents as more as a ghost town.  On one side a high wall separates the street from the dockyard.  Small blue plaques provide snippets of the history of the area.  Sentry boxes in the wall have been bricked up; one has been turned into a mosaic.  On the other side of the road, most of the buildings appear unoccupied.  There are a couple of old pubs, but these seemed to be as deserted as everything else.

The dockyard itself is inaccessible.  There was a fort in Sheerness dating back to Henry VIII’s time, and in 1666 work was started to replace it with a stronger structure.  Alas, it was never finished.  In 1667, the Dutch raided the Medway during the Anglo-Dutch Wars.  They occupied Sheerness and destroyed the fort.  Sheerness is the only part of the British mainland to have been “conquered” since the time of William the Conqueror.  The Dutch, however, found Sheerness not to their liking.  After a few days they got back on their ships and sailed off up the Medway, to see if there was anything else worth occupying.

The remains of the fort cannot really be seen from outside the dockyard.  On the sea front, however, there is a good view to the Centre Bastion Martello Battery, another defensive structure, comprising three buildings.  Originally dating back to the 17th Century, the battery was rebuilt in the early 20th Century, but was disarmed by World War Two. 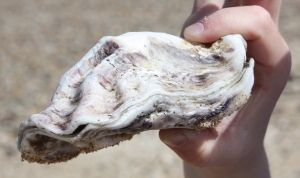 We had reached the Sheerness seafront.  At last, to the northeast, we were presented with open sea.  We turned east along the shingle beach, where amongst lots of shells we found whole oysters.  As we gradually left Sheerness and reached Minster, families played on the beach, and as the tide slowly receded, gulls and oystercatchers flew in to graze the mudflats. 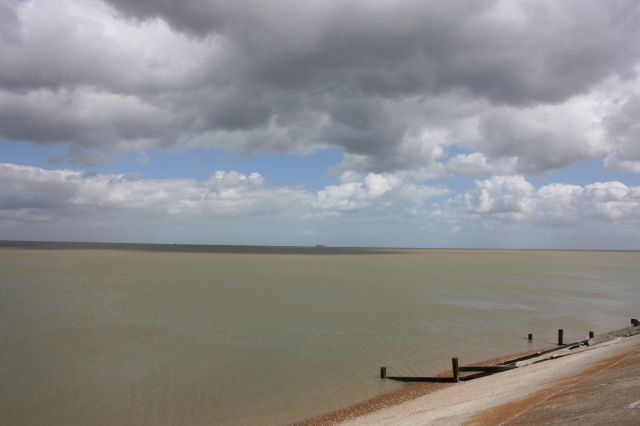 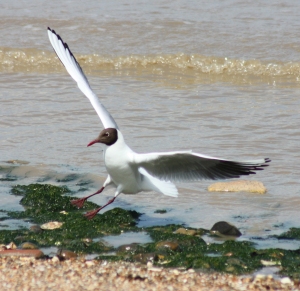 At Minster we had good views to the cliffs to the east of us.  Our aim was to walk below these cliffs, made of London Clay with a small shingle layer, which can only be done at low tide.  This is a four-mile trek.  The sea is actively eroding the area, and it is one of the best places to see erosion in action in Kent.  The cliffs date to about 45-50 million years ago, and as the sea sieves the clay and shingle it deposits fossils on the beach. 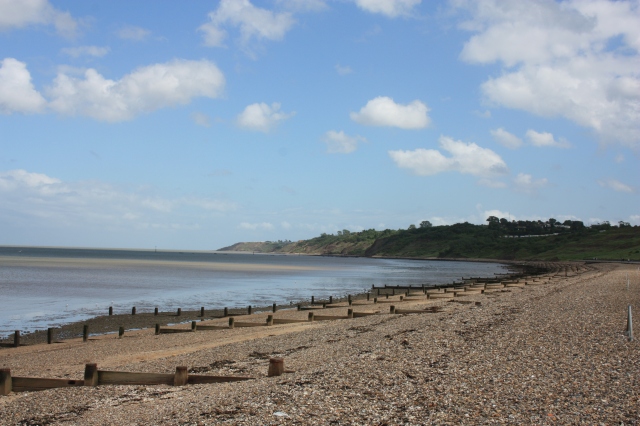 Our walk underneath these cliffs was tough underfoot, but an absolute joy.  During the whole of the four miles we saw only two other people.  One was a local dog walker and the 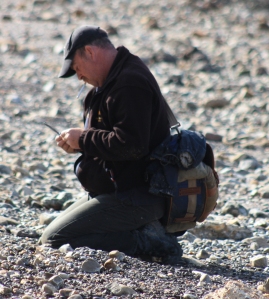 other a fossil hunter.  We were pleased to meet the fossil hunter, and spent a good ten minutes with him, learning his trade.  Although we had kept an eye out for fossils, particularly sharks teeth, we had found only an ammonite so far.  “What’s he doing here?” said the fossil hunter when we showed him.  He seemed quite surprised.  After a few minutes of expert tuition we had found a couple of gastropods, but no sharks teeth.  The fossil hunter, on the other hand, had a whole pot full of them just from today.  He gave the kids one each – what a nice chap! 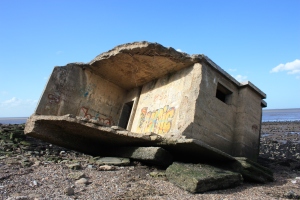 We left him to his endeavours and reached Warden, passing by some old World War Two pillboxes which had also suffered from the effects of the sea in this area.  They were beautifully tilted and lopsided.

As we ended our walk, we had a good view out to sea, to not only the Vesta Wind Farm, but also to the Red Sands Fort.  This is one of the Maunsell Forts, used during World War Two in the Thames and Medway estuaries as anti-aircraft towers.  They were built on stilts, and named after their designer, Guy Maunsell.  We could see both the Red Sands and Shivering Sands forts from where we were.  Red Sands was a lot closer, though itself is eight miles out to sea.  There is a company who runs visits out to Red Sands.  This is a trip I have often thought about, but they do not allow children to land.  Adults, however, can land on one of the structures and have a full look around.  One day I mean to get on that trip.

Shivering Sands had previously been occupied as a pirate radio station base for Radio City, starting in 1964.  It competed for audiences with Radio Caroline, but then merger talks eventually took place in 1965.  Radio Caroline agreed to deliver a radio transmitter to Shivering Sands Fort.  This was in readiness for the merger, when they planned to transfer operations from their ship to the fort.  However, the merger plans collapsed and the transmitter was never paid for.  On 21 June 1966, Oliver Smedley, who claimed ownership of the transmitter, sent a boarding party over to take possession of the fort.  That same evening, Smedley was visited at home by Reg Calvert, the owner of Radio City.  A fight broke out in which Smedley killed Calvert with a shotgun.  Smedley was charged with murder, but acquitted on grounds of self-defence.

Who needs Pirates of the Caribbean?  We’ve got our own pirates right here!

We finished our walk.  It was late in the day, but not too late to drive back to Lower Halstow and have another pub dinner at The Three Tuns.

5 Responses to 23 – Queenborough to Warden