Our walk today started in Lower Twydall (pronounced “twiddle”), to the north of Rainham in Kent.  Our objective was to follow the Saxon Shore Way as it zig-zagged up and down bits of land that jut out into the Medway, making our way ever closer to the Sheppey Bridge.

Before we could even start our walk, girlie-chaos broke out in the car park as we met Bella, a 4-month old chihuahua.  Sighs of “Awwwww look!” echoed round the car park; Bella and her owner were expertly herded and then pinned to our car by our daughter.  They didn’t mind a bit.  It turned out that Bella was the runt of a litter which was originally thought to be three puppies, but which was in fact turned out to be six.  Four were lost during a cesarean section; Bella and an older sibling survived. 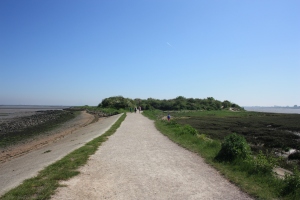 Girlie interruption over, we headed off to our first waypoint, Horrid Hill, which sticks out into the Medway like a boney finger.  Once an island, it is now reached via a causeway which was built to provide access to it.  Hardly a hill, it rises only 8 metres above sea level, and looks even less than that.  No-one quite knows how it got its name.  Some say that it dates back to when the Napoleonic prison hulks were moored here.  Notorious for their poor conditions, the locals of the area could hear the “horrid” screams from the prisoners.  Others say that the name comes from the gallows that apparently used to be here.  Smugglers were hanged and then left to swing as human bird-feeders in order to deter others from their ignoble profession.  The least grizzly contender for the origin of the name is that manure from the local farms used to be dumped here, creating a horrid smell.  As we walked up the causeway to see how horrid Horrid Hill actually was, two Royal Navy helicopters flew by.

In fact, Horrid Hill is not horrid at all; it is quite the opposite.  It is worth the short detour, and offers excellent views across the Medway to Grain and the Medway forts.  There are some ruins – perhaps to do with the prison hulks, I thought.  But no, the ruins are of a short-lived cement works dating back to 1902.  Along with many other marshes around the Medway, “muddies” used to dig for the clay that was an ingredient for cement and other building materials.  As the causeway reached the hill itself, my daughter called me over to the shoreline, where we found the area littered with small dead crabs.  In fact these crabs were not “deads” but “sheds”.  The crabs had shed their old exoskeleton so as to grow a new, slightly bigger one.

We left Horrid Hill by its single causeway, and continued east along the river bank, towards our next objective, Motney Hill.  Although the tide was out, the clear skies and the blazing hot sun provided stunning views across the mudflats. 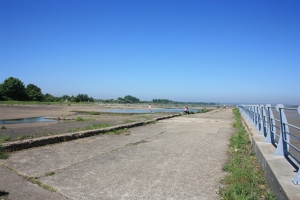 On our way to Motney Hill we came to Bloors Wharf.  Now no longer used, it is a patch of bare concrete with a couple of shallow flooded areas that dogs delight in splashing through. Bloors Wharf probably took its name from an old mansion to the south, although in 1566 there is a record of a Blower’s Wharf in this location.  Whether that is the same wharf I do not know.  Bloors Wharf was used as a fishing wharf, then latterly a scrap yard, before all buildings were removed.  Today it is simply a vantage point, affording good views over the Medway. 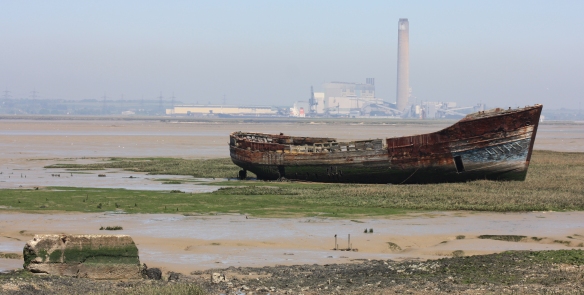 The area around Horrid Hill and Motney Hill is dotted with rusting hulks of ships.  One of the more impressive ones stands between Bloors Wharf and Motney Hill.  This is the Aberdeen.  Probably a fishing vessel, it was bought up by the breaker’s yard at Bloors Wharf and stripped of metal for the resale value.  The hull itself was left to rot, and dutifully has done exactly that for the last 30 years or so.  Wild parties used to be held here when the hull was in better condition, and on occasion police had to be called.  A local history website suggests that the hull was sold to a local resident who was told to move it on.  This was rather an expensive request; his response was to cut holes into it so that it could not be moved.  It is a beautiful bit of rubbish with graceful lines and vibrant colours.  I am glad it is still resting here; the gulls seem to like it too… 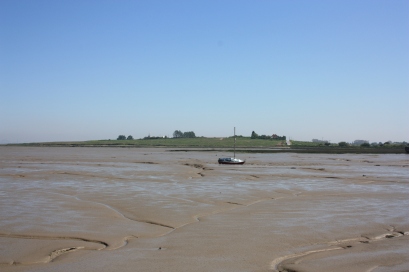 Motney Hill itself is less salubrious.  It stands at 17 metres above sea level and is home to a sewerage works.  If a visitor didn’t know that fact already, the smell on arrival soon gives the fact away.  We were going to pause for lunch, but were downwind of the buildings, so decided to move on.  We saw a couple of people with fishing rods on the shore.  This was a bit strange, as the tide was out and not due in again for some 4-5 hours or so.  We asked them what they were fishing for.  “Fish!” they replied.

The public footpath does not go right to the top of Motney Hill, but runs around its southern edge, leading on to its eastern side and the opposite shoreline.  The wild flowers were out in force today.

We walked out of Motney Hill through an industrial area, bounded on one side by the first of many orchards we would see during the second half of our walk.  Here, the path cut inland for a section of some two miles, eventually turning northeast before coming out again onto the Hamgreen Saltings.

This inland section linked one orchard to the next, by stretches of road, field, and narrow tracks running alongside stud farms, riding centres and at one point a fishing lake.  The orchards were mostly pear trees; the pears were just beginning to grow, looking like clusters of smooth sticks at the end of small branches.  The trees were only about 9 foot high, and were lined up in even and neat rows.  Some fields had a

small number of trees right up against the stone walls abutting the road, away from the main orchard trees.  Were these planted to offer freebies to would-be scrumpers?  Certainly they would provide an alternative to jumping over the wall and tramping through the orchard itself…

It was during this section of the walk that we saw what I think must be one of the largest games of noughts and crosses ever played.  Noughts had won, but it seemed they had cheated:  crosses had missed a few of their turns.

At one point we had to cross a farmer’s field.  The farmer was out in his tractor, scattering hay.  This was done with an attachment that had lethal and fast-rotating spikes, each over a foot long.  These picked up the hay and churned it out of the back, throwing it up and out by about 10 feet.  They also created a huge dust-cloud behind the tractor.  As we walked round the edge of the field, the tractor turned a corner and headed straight for us.  My wife, who adopts a cautious attitude at the best of times, and who is a staunch supporter of most if not all EU health and safety legislation, immediately flew into a flurry of orders and warnings about how to avoid the Jaws of Death as they approached.  Clearly they were under the control of a wildly deranged farmer, hell-bent on fertilising his field with finely diced human remains – why else would he turn his tractor in our direction?  Whilst we were all relatively keen to ensure that the passing of the tractor did not involve our own passing aswell, it was my wife who saw this as a real possibility and took charge of the situation.  We stood to the side and the farmer also obligingly veered slightly in to the field so as to give us a wide berth.  He smiled with a friendly wave as he passed, before his tractor showered us in a dust-storm of hay clippings.

Eventually, we passed through Ham Green and emerged on to the banks of the Medway and Hamgreen Saltings.  Here there were good views across to Grain, and in particular over to the Sheppey Crossing which is our destination for next week. 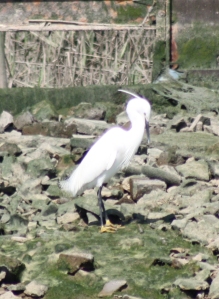 We were now on our final leg of the journey, heading southeast towards Lower Halstow.  An egret flew in and preened itself on the marshes as we walked.  In some respects this is a strange bird, with sharply contrasting white body, black legs and yellow feet.  I think they look like they are only half-dressed.

Lower Halstow, or at least the part we saw, is a beautiful village.  As we walked in past the Norman church there were ducks roaming around the grass verges of the pavements.  The houses and gardens were pretty and well-tended.  We spied a pub, The Three Tuns, which was beautifully kept, friendly, and served good beer and good food.  It dates to around the 1420’s and has held a licence since the early eighteenth century.  We ended up staying for an evening meal and got home late.  We shall probably do the same again next week, as we will be parking here to pick up where we left off. 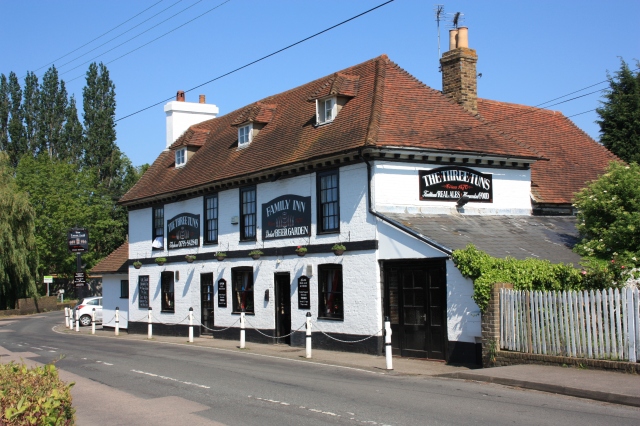