The reason we started our Coast of Britain Walk in the Southend area was because we knew we would be able to bribe the kids with trips to Adventure Island!

There is something of a history to Southend Pier, and I suspect there is more history yet to be made; it has had an eventful life.

When Southend started growing as a tourist resort, it had one major problem.  The mudflats made the water too shallow for boats to dock and offload would-be tourists.  Many boats therefore sailed past Southend, dropping their money-spending tourists off at other seaside resorts further out, such as Margate.

Sir William Heygate, a resident of Southend and a former Lord Mayor of London, started lobbying for the construction of a pier, and this resulted in an 1829 Act of Parliament, authorising the same.  In 1830, a 600-foot long wooden pier was officially opened, but was still too short to be used at low tide.  Extensions were required, and in 1848, after several additions, the pier stood at 7,000 feet (1.32 miles) and became the longest pleasure pier in the world.

In the 1850’s the railway reached Southend.  It was decided to demolish the wooden pier and build an iron one which could support a train.  This was completed in 1889, and an electric railway was added.

During World War II the pier was taken over by the Royal Navy and used as a mustering point for convoys.  The Navy renamed it HMS Leigh, and during its wartime service 84,297 vessels sailed from it in 3,367 convoys.  After the war it was reopened to the public, and had its most popular year in 1949, when 7 million people visited it.

The pier’s post-war life did not remain so buoyant.  In 1959 a fire destroyed the pavilion at the shore end; some 500 people became trapped and had to be rescued by boat.  The pavilion was replaced by a bowling alley.  In 1976 the pier-head caught fire, destroying most of the buildings as firemen tried to douse the flames from the pier, from boats, and even from crop-spraying aircraft.  One year later the bowling alley caught fire.  It was only damaged on that occasion, but then burnt down completely in 1995.  In the meantime, the railway was deemed unsafe and closed down in 1978, and in 1980 the Council announced that the pier was to close down.  Local opposition was strong, and eventually the Council agreed to keep the pier open until a restoration solution could be found.  That came in the guise of the Historic Building Committee, who in 1983 made a grant which saved the pier.  The restoration works took three years and cost £1.3 million.

Unfortunately, within months of reopening, the pier was cut in two when a ship, the MV Kingsabbey, went straight through it, causing major damage and creating a 70 foot gap between the two halves.  The pier was repaired once again, and further grants from Europe and the UK government allowed further redevelopment and regeneration to take place.

On 9 October 2005 another fire broke out, destroying many of the buildings on the pier-head.  Thus, whilst many pleasure piers have pier-head attractions, Southend’s does not.  Today, the pier-head has an RNLI station, and trains still run from the shore to the head.  It is served by a modern lift structure with viewing platform at the shore end.  The pier today remains approximately 7,000 foot long.

Aside from the unfortunate MV Kingsabbey slicing the pier in two, there have been numerous other bumps and bruises.  Thus, when we arrived on the day of our walk and were told that the last third of the pier was closed due to collision damage from a barge, we were not that surprised.  Still, we paid our £1.00 per person and decided to walk the first mile that was open to us. 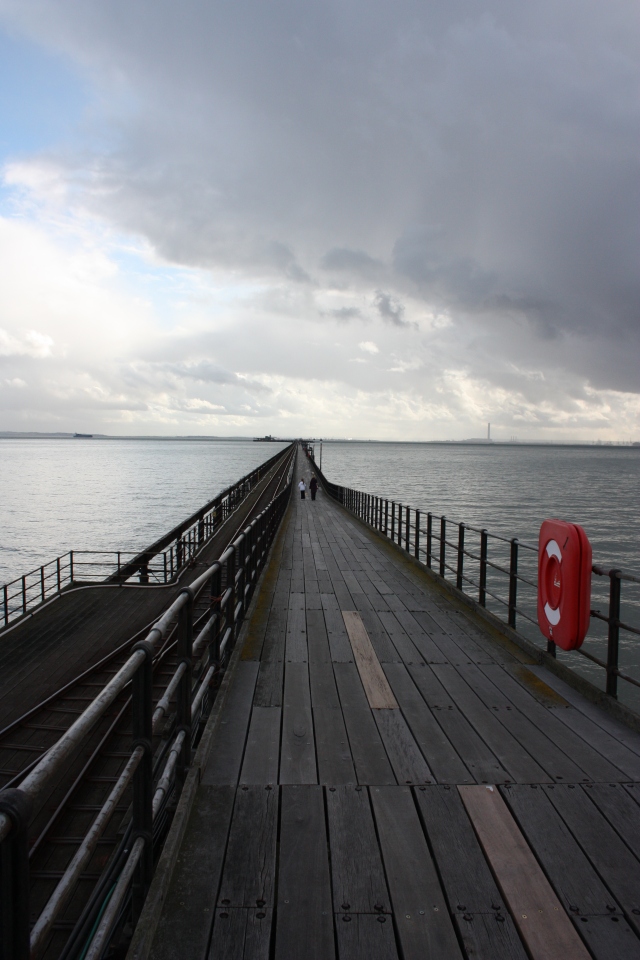 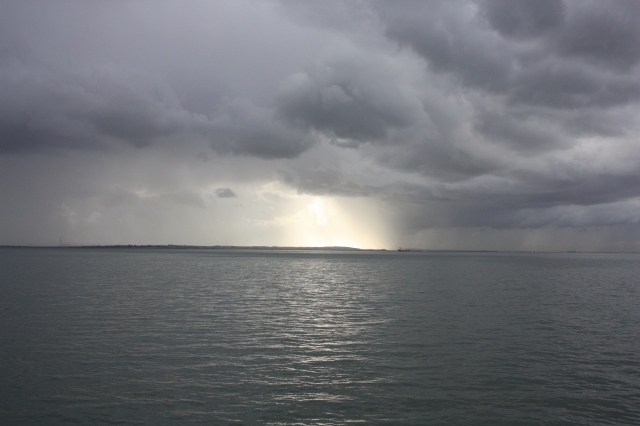 As we wandered down the pier there were dramatic views of a threatening weather front.  Half a mile down the rain got us.  It had been trying all day, but had been thwarted until this point.  It clearly bided its time, and when it saw we were half a mile out to sea on an open pier, it took its chance.  The wind battered us and blew stinging ice-like rain drops into our faces.  We turned and fled.  The rain showed its scorn at our cowardice and drenched the backs of our trousers as we ran away.  Only my son was defiant, and for his bravery was rewarded with an even greater drenching!

We abandoned our trek, though we had luckily walked the pier in June, and got a chance to go under the pier-head at that time too.  The taxi driver who took us back to our car was very tolerant of the fact that we were so wet we left puddles on his leather seats.  I took my shirt off and wiped them down, drying them as best I could.  The taxi driver remarked that we had been unfortunate.  Great Wakering (just to the north-east, and where we started stage one of our coastal walk) is apparently the driest place in Britain.  Some consolation! 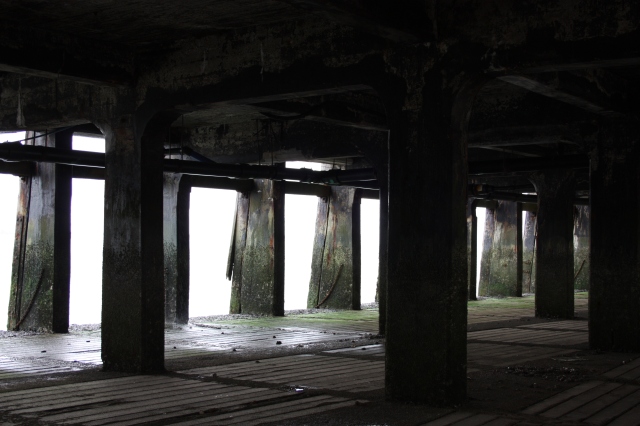 Stage Three of our Coast of Britain Walk will start from Southend pier and continue eastward.